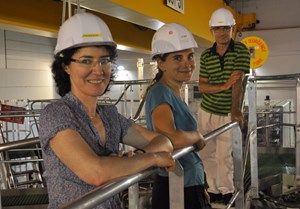 This vertical reflectometry diagnostic (DREVE) was installed at Tore Supra in March 2010. When the installation resumes operation in October, DREVE's data will be combined with that of DIFDOP to provide a much clearer picture of the movements inside Tore Supra's plasmas and, by extension, inside fusion plasmas in general.