What's next for the stellarator?

Share Tweet
Fusion world | What's next for the stellarator?
Earlier this year, the Wendelstein 7-X stellarator fusion project reported record achievements from its most recent experimental campaign. Newsline spoke with the project's Scientific Director Thomas Klinger about the work behind the recent achievements, the preparations for the next experiments and the future of the stellarator. 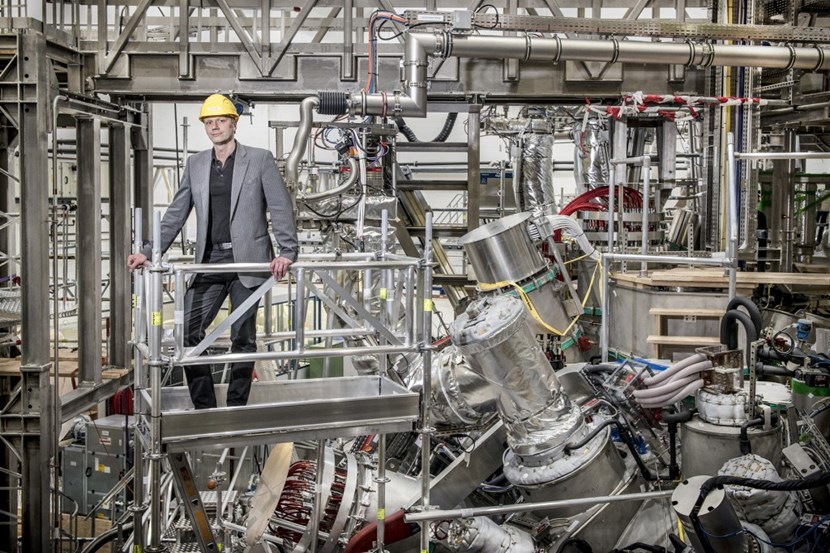 Recent achievements at Wendelstein 7-X show that the stellarator is catching up with the tokamak in terms of performance, says the project's Scientific Director Thomas Klinger. Photo: IPP, Achim Multhaupt
Earlier this year, in June, the Max Planck Institute for Plasma Physics (IPP) announced that it had achieved record results in producing a plasma. What led to this success?


The Wendelstein stellarator project is following a step-wise approach to full operation, much like ITER will. We have conducted two experimental campaigns and are now preparing for the third. We started the first experimental campaign in 2015 with somewhat of a "naked machine"—the machine was constructed, successfully commissioned and had created first plasma, but at that time, it was not yet equipped with proper plasma-facing wall components or a divertor. Instead, it just had a limiter and a metal wall.


Over the following 14 months, we worked on the divertor, the machine's exhaust system for extracting heat and particles, which enables us to control the density and the purity of the plasma. In addition, we installed graphite tiles in the areas of the vacuum vessel with higher heat loads.


The divertor and the in-vessel cladding were real gate-openers. We saw a whole new world. We could increase the heating power and achieve much longer plasma discharges, but we still had problems with obtaining high plasma densities. We identified the problem—oxygen impurities emanating from water released by the graphite tiles were strongly emitting light. We solved the problem by conducting wall conditioning by boronization (oxygen is "pumped out" by boron). All of a sudden we had clean plasmas, the oxygen light emission dropped by a factor of ten, and we were able to ramp up plasma densities to much higher values. 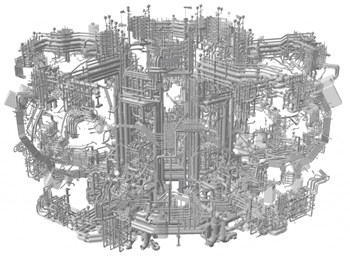 This CAD model shows all the intricate details of Wendelstein 7-X's future water cooling system. Image: IPP
What are the next steps for the Wendelstein project?


These results were promising but have also shown limits. An input heating energy of 200 MJ is the maximum we can allow without causing damage to the wall components. The formula is simple: the heat generated by the injected energy has to go somewhere. So far, this happens by inertial cooling.


The next step is the installation of components in the vacuum vessel that are actively water-cooled. We will replace the current divertor with actively cooled divertor modules and will connect all wall elements to the water cooling system, which is a complex spider web of water pipes permeating the entire device (see image at right).


To prepare for these optimizations we are now in a two-year shutdown phase until the end of 2020, during which we will finalize the installation of the actively water-cooled system and start commissioning.


Tokamak vs stellarator: both projects will continue to be pursued in parallel ...
It's not a competition—we need to develop fusion as a clean, safe and reliable source of energy for the future. Both projects have their place in this ambitious endeavor and both systems have advantages and disadvantages.


The tokamak achieves better plasma performance in terms of temperature, density and confinement, but disruptions—now a major research topic in tokamak physics—can be a challenge. Stellarators on the other hand are disruption-free machines, however you pay the price by having to build a device with a challenging geometry. In the past, the performance of the stellarator could never match that of the tokamak, but it is now catching up and with upcoming optimizations some of the performance-related disadvantages can be overcome.
This week you presented the Wendelstein 7-X project at the 6th FuseNet PhD meeting at ITER Headquarters. What did you take away from that meeting?


Fusion always has been, is and always will be a generation-spanning project. Fusion is a challenge too big to be solved within a lifetime. Therefore, we need to have handover from one generation to the next. In fact, it's already a very smooth process; there is a permanent transfer of knowledge to the younger generation of fusion experts. It was good to see that the students are looking at both fusion device options. There is a completely natural mix of study topics related to tokamaks and stellarators.