Not just any pipes

Share Tweet
Cryolines | Not just any pipes
In order to produce and sustain plasmas ten times hotter than the core of the Sun, some essential elements of the ITER machine need to be cooled to temperatures only encountered in the void of outer space. Superconducting magnets and cryopumps will operate at a few degrees above absolute zero—~ 4 K, or minus 269 °C—and the thermal shield will be only slightly warmer (80 K, or minus 193 °C). These temperatures are obtained by circulating a steady flux of cryogenic fluid through a complex network of high-technology piping—the ITER cryolines. 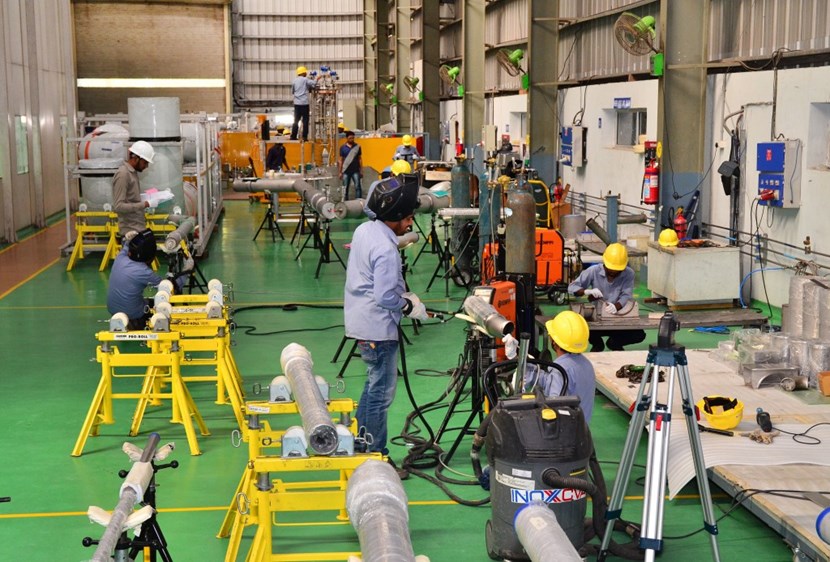 Manufacturing of the ITER cryolines began in 2017 at the Cryo Scientific division of INOXCVA, an Indian company with a half-century's worth of experience in cryogenics. The dedicated workshop is located in the outskirts of Vadodara, an industrial city with a population of more than two million in the western state of Gujarat.
Cryolines begin their long journey in the ITER cryoplant—where the cooling fluids are produced—and continue along an elevated bridge to the Tokamak Building, about 100 metres away. A section of cryoline can host up to six or seven "process pipes," each devoted to a specific fluid, flow direction or function.


Cryolines rarely run straight; instead they bend and turn to adapt to the topography of the worksite, or to snake their way through the congested spaces of the cryoplant and Tokamak Building.


ITER will have approximately 5 kilometres of cryolines ranging from 25 to 1000 millimetres in diameter. Part of India's contribution to ITER, the procurement is split between two companies, France's Air Liquide and India's INOXCVA.


Not just any material can be chosen to transport extremely low-temperature fluids. "Extreme cold makes most material brittle," says Nitin Shah, the technical responsible officer for the ITER cryolines. "As a consequence we need to use special-grade austenitic stainless steel, low in carbon and high in nickel and chromium."


Contraction is another challenge. When exposed to cold, materials retract—and when cold is extreme, contraction is significant. In the ITER cryolines, a 10-metre pipe will shrink in length by 3 centimetres when the cooling fluids begin to flow inside.


The solution for compensating such contraction comes in the form of steel bellows and flexible hoses, made out of an extensible material and placed at regular intervals along both the inner pipes and the outer jackets. 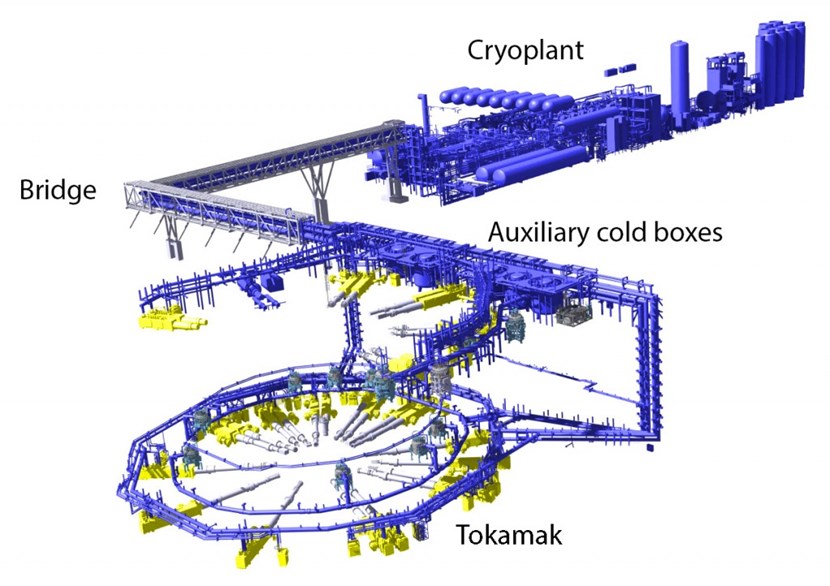 The cryoline network that connects the cryoplant to the different systems (or ''clients'') inside Tokamak, consists of approximately 5 kilometres of high-tech pipes ranging from 25 to 1000 millimetres in diameter and accommodating up to seven inner pipes, each devoted to a specific fluid, flow direction or function.
Like frozen food brought home from the supermarket, the cooling fluids flowing in the cryolines must be carefully insulated in order not to warm up during their journey from the cryoplant to the Tokamak Building and back. As the temperature gradient between the fluids and the outside environment is particularly high (on the order of 300 °C) the insulation of the cryolines is particularly sophisticated.


"There are three ways by which heat is transmitted from one environment to another: radiation, convection and conduction," explains Shah. To minimize transmission by radiation, the inner pipes of the cryolines are wrapped with between 30 and 60 layers of glass-fibre/aluminized Mylar insulation. Convection is dealt with by creating a high vacuum within the outer jacket.


And as for conduction, it occurs through solid contact. "As the inner pipes are attached to the inner wall of the cryoline jacket, transmission by conduction is not completely unavoidable," says Shah. "But we can reduce it considerably by using as few support pieces ('spacers') as possible, by optimizing their geometry and, of course, by choosing the least conductive material."

Second comes the 4,000-square-metre thermal shield that protects the magnets from thermal radiation. Cooling this huge surface to 80 K (minus 193 °C) requires approximately 40 percent of the cryoplant's cooling power. Here too, helium will do the job—this time in gaseous form.

The remaining capacity of 15 percent is "consumed" by the cryopumps, whose cryosorption panels also require cooling to 4 K.

Nitrogen, extracted from the atmosphere and liquefied in the cryoplant, will be used as a "pre-cooler" for helium. But as nitrogen is activated by the neutrons from the fusion reaction it will not circulate within the Tokamak.

As if all these challenging requirements were not enough, the ITER cryolines must also be particularly robust to resist the forces that could be exerted in case of a quench, which is the sudden loss of magnet superconductivity. During a quench the cooling fluids need to be transferred almost instantaneously from the machine to the quench tanks.


At Indian Domestic Agency contractors Air Liquide (France) and INOXCVA (India), fabrication is approximately 50 percent complete. Newsline recently visited the Indian facility located in the outskirts of Vadodara, an industrial city with a population of more than two million in the western state of Gujarat (see gallery below).


INOXCVA is a company with a quarter-century of experience in cryogenics, and whose Cryo Scientific Division is deeply involved in space applications, the nuclear industry, and all other major technologies involving cryogenics.


The manufacturing of spools—the 2- to 10-metre sections of cryoline that, once assembled at the ITER site, will form the cryoline network—began in 2017 in a specially constructed workshop complete with a clean room devoted to the most delicate and sensitive operations.


For the team at INOX, the challenge in filling the ITER order lay in the stringency of the technical specifications as well as in the quantity of spools to be produced—approximately 700 of them, each with a different shape.


"The ITER cryolines are all angles, bends and turns. Less than 20 percent of the spools we need to produce are straight," says Sanjay Gajera, the quality responsible officer at the INOXCVA facility in Vadodara.


In the large open space of the workshop, dozens of spools are in various stages of fabrication and, indeed, very few are straight. The factory receives the raw pipes from India and Europe (mainly the Ukraine); once cut to the required dimensions and cleaned, the welding process, which is exclusively manual, can begin. "Because of the complex shapes involved it is impossible to use automatic (orbital) welding machines," says Sanjay.


The inner pipes pass through the clean room to be wrapped in insulating tape multilayer insulation before being inserted into their outer jacket. At each stage of fabrication, the pipes are visually inspected and their internal surface and welds are explored by way of "boroscopy" (using a visualizing tool similar to an endoscope), X-rayed and cold tested.


At the end of this process, the spools are sealed at both ends under a slightly pressurized atmosphere of nitrogen to protect them from corrosion and impurities during storage and transport, and until they are assembled and welded on site at ITER by INOXCVA personnel.


The first batches of INOXCVA cryoline spools reached ITER in July 2017 after a one-month sea voyage from India. Installation in the cryoplant is underway; in the Tokamak Building work will begin this summer. The bridge between the two buildings will be in place in 2023, and the cooling fluids should begin circulating in the crydistribution network in 2024 in anticipation of First Plasma scheduled the following year.


Click here to view a video of the fabrication process at INOXCVA.

Only 20 percent of the 700 cryoline "spools" entrusted to INOXCVA are perfectly linear. "The ITER cryolines are all angles, bends and turns," says Sanjay Gajera, the quality responsible officer at the INOXCVA facility in Vadodara, India.

The inner pipes of the cryolines are connected to the outer jacket by way of support pieces called "spacers," whose material and geometry reduce thermal conduction. There are machined on site in the Vadodara workshop.

In order to check the leak-tightness of the welds, helium is injected into the process pipe at room temperature and at a certain pressure. If a leak is detected, the weld will be re-done.

Sealed under a pressurized nitrogen atmosphere and tightly wrapped in protective material, the cryoline spools are placed inside a transport frame and loaded into a 40-foot container to be delivered to the ITER site.

The ITER cryolines are designed to withstand the tremendous forces that could be exerted in case of a sudden rise in pressure, such as in a "loss of vacuum event" or a quench (the sudden loss of superconductivity in the magnetic system.)

Because of the tormented shape of the spools, welding operations can only be performed manually. Welding parameters such as current intensity, voltage and welding speed are particularly stringent.