A whole suite of tools and technologies

Share Tweet
Vacuum leaks | A whole suite of tools and technologies
The Greek philosopher Aristotle (384-322 BC) knew nothing about tokamaks. But when he stated in his famous aphorism that "Nature abhors a vacuum,"¹ he anticipated one of the problems that tokamak designers would face 25 centuries later.

Among the systems and tools is a self-propelled ''in-pipe inspection tool'' that can wiggle its way into the smallest and most contorted piping networks inside the machine.
Vacuum occupies a large part of ITER, both literally and figuratively—vacuum volumes are huge and vacuum challenges daunting. Successful plasma operation rests on the quality of the vacuum in the (aptly named) vacuum vessel, but also in the cryostat, the neutral beam injection system, and many other systems.


A vessel under vacuum is submitted to pressure from the external environment ... and the higher the vacuum, the more aggressive is the attack of particles from the environment and surfaces.


Gases and liquids will find the tiniest breach in a structure under vacuum. "A crack the width of a human hair is enough to alter the vacuum quality and halt fusion performance," emphasizes ITER Vacuum Section Leader Robert Pearce. Nature not only abhors a vacuum, it conspires by all available means to destroy it ...


Close to ten years ago, an intense R&D program was started to develop risk-mitigating concepts for leak detection and localization. The Procurement Arrangement that was recently signed between the European Domestic Agency, Fusion for Energy, and the ITER Organization is a direct outcome of this decade-long effort.


Under this agreement and the Amendment which is under preparation, Fusion for Energy will deliver a whole suite of ITER-designed systems and instruments to detect and localize leaks throughout the vast volumes of the vacuum vessel and cryostat, and also in smaller areas such as the neutral beam injectors or the cryopumping systems.


"Basically it's about ensuring the integrity and leak testing the totality of the machine: the 2,000 m³ of the vacuum vessel, the 8,500 m³ cryostat (pumping volumes);  the primary vacuum for the neutral beam, not to mention the tens of kilometres of piping carrying gases and fluids that could leak into these volumes," explains ITER Vacuum Section leader Robert Pearce.


Although the risk of leakage is minimized by design as well as best practices and quality control throughout the fabrication and assembly processes, it cannot be reduced to nil. "There should be no leaks," says Vacuum team member Liam Worth, "but experience tells us that if we achieve this it will be a 'miracle.' To date, all tokamaks, stellarators, particle accelerators, and other vacuum installations of large size and complexity have experienced a certain number of leaks." 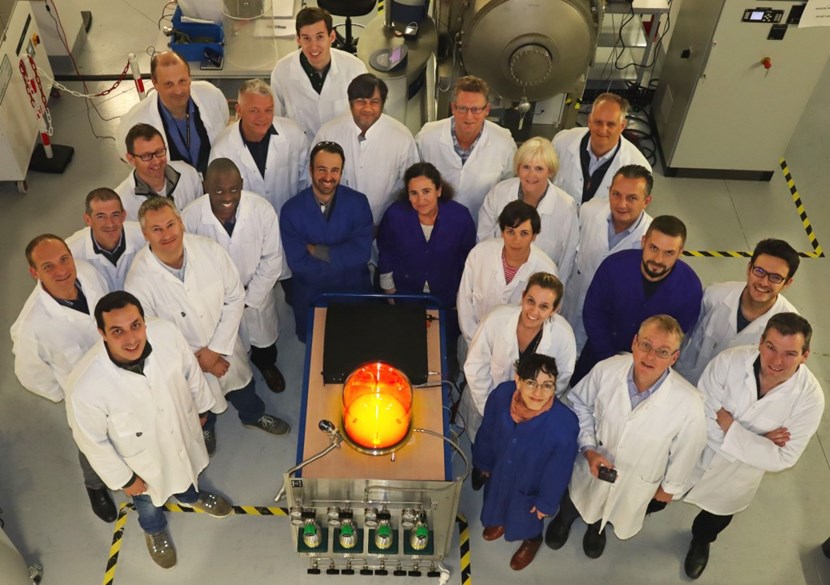 Achieving and maintaining the required vacuum in the ITER machine is an immense task that the Vacuum Team took on more than one decade ago.
Some leaks are "tolerable" but others are not. "There are thresholds," explains Liam. "We can cope with the thermal shield or magnet system leaking a minute quantity of helium into the cryostat. But a leak into the vacuum vessel, whether of air or water, starts to affect plasma performance as the size increases and so cannot be easily tolerated."


Once detected and localized, leaks can of course be fixed, generally by cutting, replacing, bypassing, or isolating the faulty part. In some cases it is relatively easy; in others—for example in the case of a leak occurring in one of the in-cryostat helium lines—it would be a "huge job" to repair, according to Liam.


Among the systems and tools presented at the recent design review is a spectacular device—a self-propelled "in-pipe inspection tool" that can wiggle its way into the smallest and most contorted piping networks (see video) and find its way deep into the cryostat. 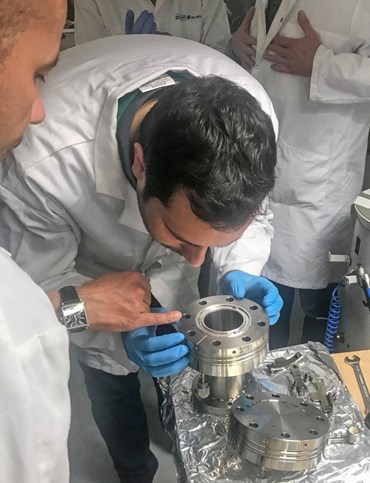 In the ITER vacuum lab, a vacuum flange is inspected for small scratches which could potentially cause a leak. New tools and technologies will enable the localization and detection of leaks smaller than the width of hair divided by one million.
Conceptualized by the ITER Organization and developed by Doosan Babcock in Scotland, the working prototype of the articulated tool can propel itself inside pipes no larger than 40 millimetres in diameter, move forward and backward, take a 90-degree turn and, thanks to a tiny video camera and built-in lighting system, provide high-resolution images (better than 0.01 mm) of potential cracks or faulty welds. The device, which is evocative of an ultraminiaturized freight train or an oversized, segmented tapeworm, is equipped with inflatable "bladders" that can isolate and locate leaks in precise sections.


Although basic in-pipe inspection tools are standard in industry for much larger pipes, the articulated tool is unique. "Nothing in the world can do what it does," says Liam. "It's reduced size means, for instance, that 100 percent of the thermal shield manifolds² are accessible for inspection and leak localization."


"With the exception of the drive mechanism, all the prototype tool's components, including motors, are off-the-shelf or slightly modified off-the-shelf," says Liam. "The concept design has been demonstrated but the tool can be significantly improved with the use of bespoke components that are smaller and lighter."


"In the more distant future, with advances in material and electronic technologies, such a tool could be further miniaturized by a factor of 10 and provide an even more powerful tool for leak localization and repair for fusion devices and many others," concludes Pearce.


Achieving and maintaining the required vacuum in the ITER machine is an immense task that the Vacuum Team took on more than one decade ago. As ITER is now gearing up for assembly operations, the team is moving forward with a new set of tools and technologies that potentially enable the localization and detection of leaks smaller than the width of hair divided by one million.


¹-Aristotle couldn't have known that at the atomic scale, Nature—that is, the material world—is essentially made of ... vacuum.


²-A manifold is an arrangement of interconnected pipes. In the ITER thermal shield, the manifolds supply cryogens to the shield's panels.


Read a related story on the Fusion for Energy website.