The Future of Fusion Energy

Share Tweet
Bookmark | The Future of Fusion Energy
To write about fusion is to walk a fine line between the temptation of lyricism and the arid demands of scientific accuracy. Whereas the general media tends to succumb to the first, fusion specialists rarely dare to depart from the second. 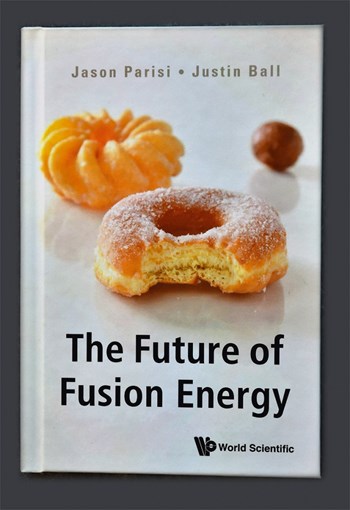 The lay reader will enjoy the narrative flow and its touch of humour; the specialist will be satisfied with the equations contained in the ''tech boxes'' that pepper this 400-page book.
Fusion is a highly complex field of research that encourages oversimplification. The principle may be simple, but the implementation is of mindboggling complexity.


Fusion is the stuff of dreams—it is about "bringing the power of the stars to Earth" and ensuring an endless supply of clean and safe energy for the eons to come. It also has its share of nightmarish challenges: how do you confine a star in a man-made machine ? How do you keep it burning? How do you "capture" the energy it radiates?


Both the lay writers addressing the general public and the specialists talking to their peers can answer these questions. But it takes a special talent to write about fusion without losing the interest the average reader or offending the physics PhD.
Jason Parisi, of the University of Oxford, and Justin Ball, of the Swiss Federal Institute of Technology in Lausanne, have this talent.


As young fusion scientists they "see a massive disparity between the current state of the field and the descriptions available to the public." The thick book they have just published, The Future of Fusion Energy (World Scientific) aims to "bridge that gap," and it succeeds.


For the reader in a real hurry, the book's introductory pages summarize "The case for fusion": fusion, Parisi and Ball write, "is an attractive, sustainable solution to humanity's energy problems," but also "a massively complex problem that requires significant upfront investment."


Contrary to what fusion (and ITER) opponents claim, fusion has been underfunded for decades, the authors argue. Current funding for fusion is "peanuts"—literally. (Subsidies for peanut farmers in the US are nearly double the entire budget of the Office of Fusion Energy Sciences.)


Over twelve chapters, Parisi and Ball take the reader through a crash course on energy; its principles, as illustrated by numbers and graphs; fusion fundamentals; the state of the art (with a large section devoted to ITER, defined as "one of the most ambitious science experiment ever"); and alternative approaches including stellarators and inertial confinement fusion experiments, as well as some of the unorthodox approaches of the private fusion startups.


It would be excessive to say that the book reads "easily." It demands attention, but that attention is rewarded—the lay reader will enjoy the narrative flow and its touch of humour; the specialist will be satisfied with the equations contained in the "tech boxes" that pepper the book.


Fusion, the authors conclude, is "one of the most exciting and consequential endeavours in human history." After close to 400 pages, with or without "tech boxes," the reader clearly understands why.