Share Tweet
"Vigyan Samagam" | India showcases megascience
From micro to macro—specifically, from the India-based Neutrino Observatory (INO) that will study neutrino mass ordering events lasting 10-43 seconds, to the Laser Interferometer Gravitational-Wave Observatory (LIGO), which has detected gravitational waves through the study of black holes and stars in merging events lasting a few billion years—seven of the world's mega-science projects came together last week for the launch of a major exhibition in Mumbai. 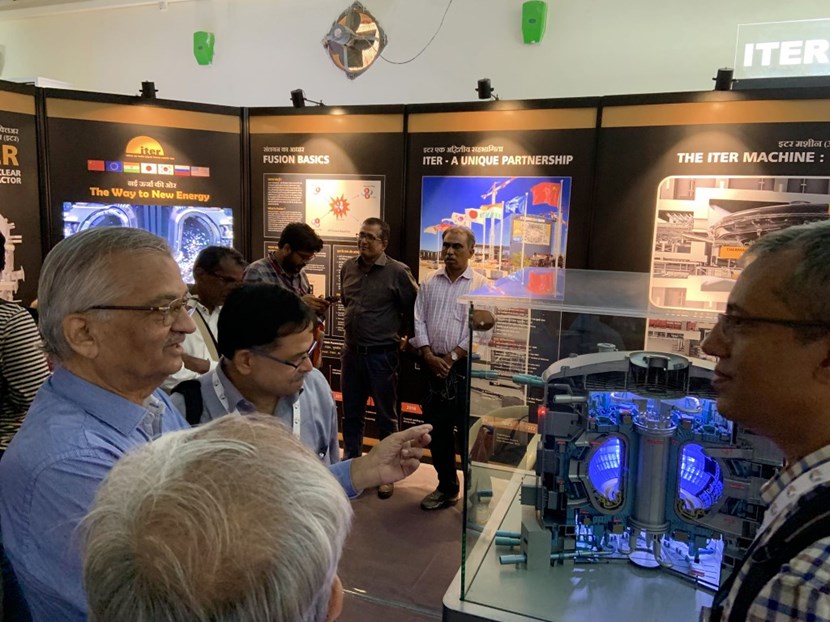 Anil Kakodkar, former chairman of the Indian Atomic Energy Commission and one of India's most renowned champions of nuclear energy, speaks with Ujjwal Kumar Baruah (on his left), ITER India project director, and Indranil Bandyopadhyay (on his right, from ITER India) at the opening of the ITER exhibition at Vigyan Samagam.
Appropriately titled "Vagyan Samagam," from the Hindi words for "science and confluence," the exhibition will move from Mumbai to Bangalaru to Kolkata to Delhi over an 11-month period, raising awareness of ITER and other mega-science projects in which India plays a prominent role.


Arun Srivastava, who is both the Chair of the ITER Council and the Head of the Institutional Collaboration and Program Division in India's Department of Atomic Energy (DAE), was one of the driving forces in bringing Vigyan Samagam from an idea to reality. The goal, he says, is for this traveling roadshow to "provide a unique science communication platform, creating a bridge for further interaction between India and its global peers, and bolstering India's contribution to prestigious global science projects."


On a practical note, the expected attendance of millions of viewers will help make fundamental science accessible to the Indian public, highlight the value to Indian industry of being engaged in the cutting-edge technologies that support these mega-projects, and—above all—inspire the next generation of Indian scientists and engineers.

Click to download the conference poster ''From micro to macro: Understanding the universe through mega-science projects.'' (Credit: Vigyan Samagan)
The ITER Project was featured at a special session on Thursday 9 May. Attending dignitaries, audience members, and journalists alike remarked on the physical progress of the project, and the way in which ITER spans both fundamental research and the pragmatic objective of abundant energy.


Vigyan Samagam is being sponsored by the DAE, the Department of Science and Technology, and the National Council of Science Museums. In addition to ITER and the other science projects mentioned above, the traveling conference and exhibition features CERN, the Thirty Meter Telescope (TMT), the Square Kilometre Array (SKA), and the Facility for Antiproton and Ion Research (FAIR).


Follow this link for a 19-minute interview with author and journalist Pallava Bagla: "India Hungry for Fusion Energy! ITER is Coming: Laban Coblentz, ITER," filmed on the site of the Vigyan Samagam exhibition.