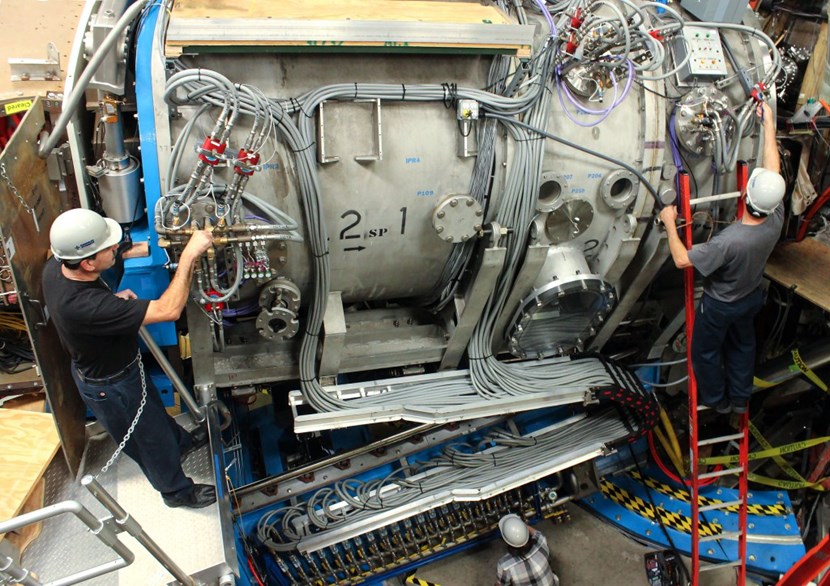 In operation since the 1980s, DIII-D played an important role in providing data for the engineering design phase of ITER and has since led pioneering research in a wide range of fusion science issues. With its latest upgrade completed, the device will be capable of exploring advanced physics phenomena that are important to making fusion a viable energy option.
Operated by General Atomics in San Diego, California, DIII-D is a world-class fusion laboratory where 650 researchers from the US and across the globe explore a wide range of topics from fundamental plasma science to fusion power plant operations.


The facility has been offline since May 2018 as a team of more than 100 engineers and technicians from General Atomics and collaborating institutions worked to install new capabilities for driving current in the machine. Controlling how this current is distributed is a key tool for optimizing performance in fusion plasmas.


The largest upgrade project was the installation of a new steerable neutral beam system. Weighing more than 50 tonnes, it will allow researchers to vary the angle at which high-energy atoms are injected into the plasma for heating and control, enabling researchers to produce, study and exploit advanced physics important in making fusion reactors economical in the future.


The team also installed an innovative system that researchers expect will significantly reduce the amount of power required to drive electrical current in the plasma. This system is predicted to double the current-drive efficiency by injecting microwaves from the top of the tokamak, rather than from the side. Significant progress was also made toward installing a new, advanced antenna to launch ultra-high frequency "helicon" radio waves, which are more efficient and work over a wider range of plasma densities than earlier radio wave systems. Final installation of the helicon antenna is planned during the next opening of the tokamak this fall.


In other work, the team used a new 3D laser scanning system to precisely align the upper divertor, which allows heat to dissipate prior to contacting the internal surfaces of the tokamak.  This upgrade, in combination with newly installed measurement systems, will allow researchers to assess how the immense heat generated during plasma operation is best vented out of the tokamak.


The DIII-D Program has been the recipient of numerous scientific awards for pioneering research. For the upcoming experimental campaign, the program received over 500 proposals for experimental time, with many researchers planning to exploit the recently-installed upgrades.


"The new upgrades continue DIII-D's rich history of providing innovative solutions to key issues in fusion development," said Mickey Wade, deputy director for Magnetic Fusion Energy at General Atomics. "It is my expectation that these upgrades will place DIII-D experimental time in high demand in the coming years, as researchers seek to capitalize on these new capabilities."
See the DIII-D press release.