A frontier town at the frontier of science

Share Tweet
Worksite | A frontier town at the frontier of science
Like a frontier town of the American West, the ITER site grew from nothing to a thriving community of several thousand people in less than one decade. The original settlers waited almost five years to see the first buildings come out of the ground, but from then on development went very quickly. One by one, ITER acquired the attributes of a small town—roads and traffic lights, an infirmary and a fire brigade, restaurants, public transportation, law enforcement, waste collection ... and even a weekly newspaper. 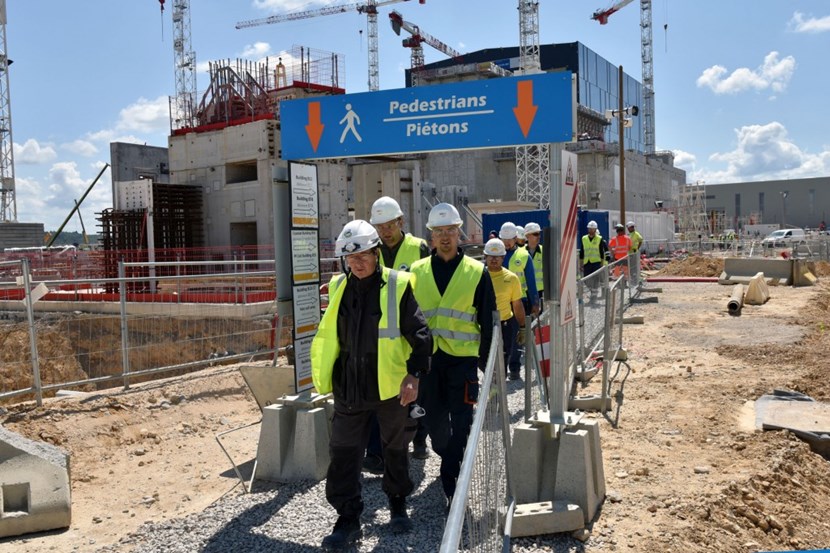 Lunch break in small-town ITER—workers head to the cafeteria for a quick meal before resuming their shift.
Small-town ITER is an international enclave in a national territory. Although small (~180 hectares) it is very cosmopolitan; its denizens hail from more than 30 countries and speak some 40 different languages.


Entering the enclave requires a special passport in the form of an access badge. There are precisely 6,610 badge holders and an average of 5,000 entries per day, not counting visitors on business and  "tourists."


The ITER outpost is both residential and industrial. More than half of its daily population heads directly to the construction site, factories, or workshops; the other "inhabitants" enter offices in the stately Headquarters building or in more modest edifices scattered around town.


ITER is a boomtown that almost never sleeps. Office dwellers start early and often stay late, while construction workers are on a two-and-a-half shift schedule—some of them working into the wee hours of the morning to lay the groundwork for the next day's activities. Whether in offices, workshops, or partially completed buildings, a sense of urgency prevails.


Roads and dirt tracks crisscross the town and traffic is intense, with an average of 300 trucks passing through the gates of the enclave every day. Supporting the life of the town requires huge amounts of material—rebar to reinforce the concrete produced in the on-site batching plant, huge formwork panels, steel columns, pipes by the kilometre, tonnes of paint, and all the indispensable supplies for what is probably the largest construction project in Europe, if not the world. 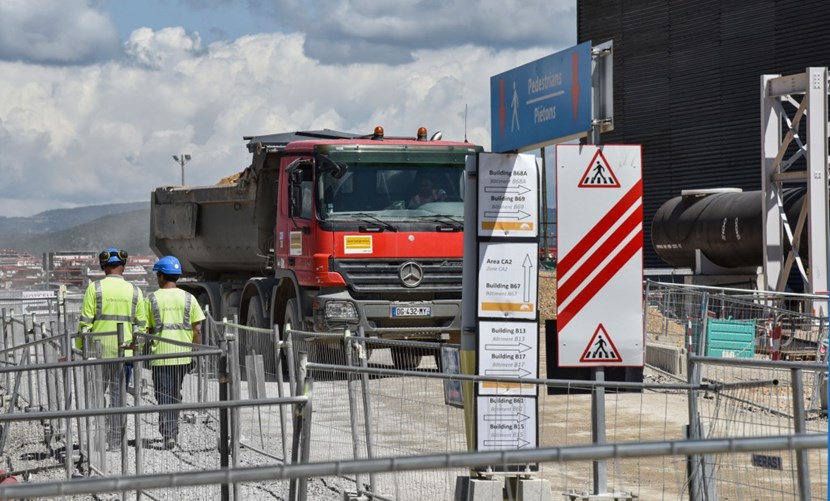 An average of 300 trucks pass through the gates of the enclave every day to deliver the huge amounts of material required for supporting daily ''life.''
Like other frontier towns, small-town ITER is a hub of activity in an otherwise sparsely populated region. The town itself is not very large but it hosts some of the most massive structures ever erected. Its landmark edifice, the ziggurat-like Tokamak Complex, will be 15 percent heavier than New York's Empire State Building when completed. More than 16,000 tonnes of steel rebar and 150,000 tonnes of concrete will have gone into its construction.


Electrical power must be managed; water for both drinking and industrial purposes distributed; waste collected, managed, and recycled whenever possible; roads and dirt tracks maintained; food and health services made available; and the "law," principally in the form of safety regulations, enforced.


For the moment only a fraction of the capacity of the electrical switchyard on site is being used, but as more and more plant systems come on line with requirements for ventilation and air conditioning, consumption will rise steadily. Soon, it will be equivalent to that of 12,000 homes, approximately 20 percent more than the nearby city of Manosque. The consumption of potable water, on the other hand, averages 16 litres per day/per person—considerably lower than the 150 litres that a citizen consumes on average (small-town ITER has a few showers but deliberately ignores bathtubs).


Industrial water is needed in huge quantities, however, for producing concrete (300 litres per cubic metre), for sprinkling on dirt tracks in the case of persistent dry weather (200 to 300 cubic metres per month), and for cleaning trucks, pipes and cement mixers—all in all an annual consumption in excess of 20,000 cubic metres, coming partly from the neighbouring Canal de Provence and partly from batching plant water recycling.


Waste in town is managed with environmental protection in mind. The "inert waste" generated by construction activity at the rate of 1,000 tonnes per month (essentially concrete chunks and residue) is transformed into construction aggregates at a plant off site. Other specific types of waste are managed and recycled according to strict regulations. Since painting operations began in the Tokamak Complex, for example, approximately 10 tonnes of empty paint pots, used rollers and chemical containers, and residues of resin are managed every month. 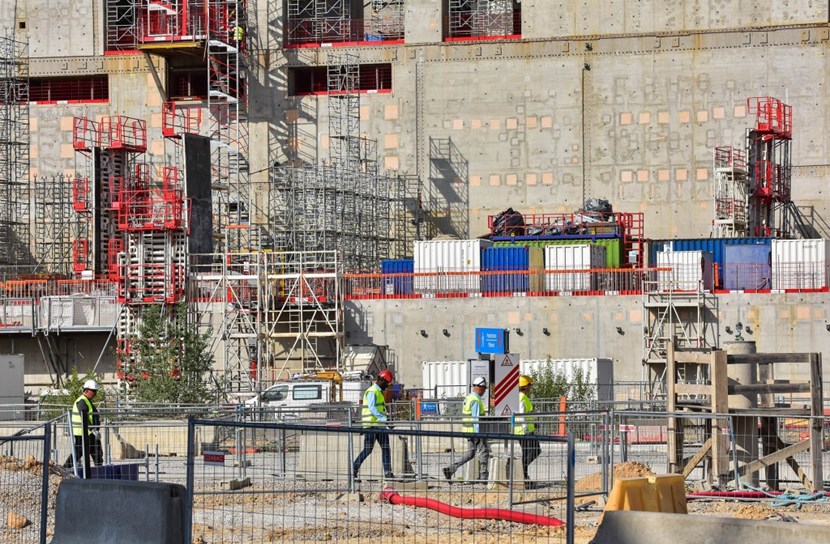 The original settlers waited almost five years to see the first buildings come out of the ground. A little more than one decade later the outpost has turned into a thriving community.
Small-town ITER is not a rowdy settlement: speed limits and traffic lights are respected and safety rules scrupulously observed. However, whenever necessary, the law is there to reprimand, punish or even, on extremely rare occasions, expel.


Whereas one is free to dress as one likes in the residential part of town, simple and strict rules apply to the construction site: long pants, protective shoes and goggles, gloves, reflective vests. And of course the hard hat—green for law enforcers, blue for managers, red for foremen and supervisors, white for workers, and yellow for visitors.


Most frontier settlements become attractive to tourists long after their heyday is over and they have turned into ghost towns. However, because small-town ITER is so unique and spectacular, it draws an average of 15,000 visitors every year—government officials, an occasional prince or princess, business executives, researchers, students and schoolchildren, pensioners, and vacationing families. Most of them discover the town's landmarks through the windows of a tourist bus. The privileged few—but they amount to hundreds—take the VIP tour inside the town's most stunning monuments.


These privileged "tourists" are a challenge to the green hats whose mission is to ensure that co-activity is carried out safely and smoothly, and that all occupational safety regulations are respected. But they acknowledge that visitors are important as they spread the word about the small frontier town at the frontier of science.


A frontier town would not be complete without a mayor and a sheriff. In small-town ITER, Laurent and Georges play the parts to perfection. Although hailing from different generations (Georges is long past retirement age), they are both veterans of large nuclear projects. Laurent likens his role to that of the "conductor" of a large symphonic orchestra playing an utterly complex sheet music; Georges is an enforcer as much as a facilitator—an old-school construction hand in a futuristic project.


The day will come when the dusty, bustling frontier settlement gives way to an immaculate research centre where lab coats have replaced hard hats and yellow vests. As the ITER Project writes history, the memory of the small town that nurtured its early years will fade. But its ancient dwellers will still be on hand to tell its story and turn it into an epic saga—which, in many ways, it was.

The weather in Provence can be dry and traffic on the unpaved roads of small-town ITER generates a lot of dust. From spring to autumn, the water sprayed to dampen the earth along four kilometres of dirt tracks consumes 200 to 300 cubic metres of industrial water per month. (Most is recycled from the batching plant.)

Amid field and forest

Like other frontier towns, small-town ITER is an outpost of activity in an otherwise sparsely populated region. The settlement was established more than a decade ago amid field and forest in a bend of the Durance River Valley.

Whether rising 60 metres above the ground or plunging several levels underground, the town's edifices are among the largest and most awesome structures ever constructed.

A strict but simple dress code is enforced on the industrial side of the tracks in small-town ITER: long pants, protective shoes and goggles, gloves, reflective vests. As for the hard hats, colour is linked to function: green for regulation enforcers, blue for managers, red for foremen and supervisors, white for workers, and yellow for visitors.

Frontier settlements didn't attract many tourists before turning into ghost towns. ITER, however, is so unique and spectacular that it draws an average of 15,000 visitors every year—government officials, an occasional prince or princess, business executives, researchers, students and schoolchildren, pensioners, and vacationing families.

The mayor and the sheriff

Every frontier town needs a mayor and a sheriff. In small-town ITER, the task falls to Laurent (left) and Georges. Although belonging to different generations, they are both veterans of large nuclear projects. As head of construction Laurent coordinates ongoing activities; Georges is an enforcer as much as a facilitator—an old-school construction hand in a futuristic project.