Have fusion, will travel

Share Tweet
Space propulsion | Have fusion, will travel
The idea of propelling rockets and spaceships using the power of the atom is nothing new: the Manhattan Project in the mid-1940s as well as countless endeavours by NASA in the following decades all explored the possibility of using fission-based reactions to provide lift-off thrust. Today, progress made in controlled nuclear fusion has opened a new world of possibilities. 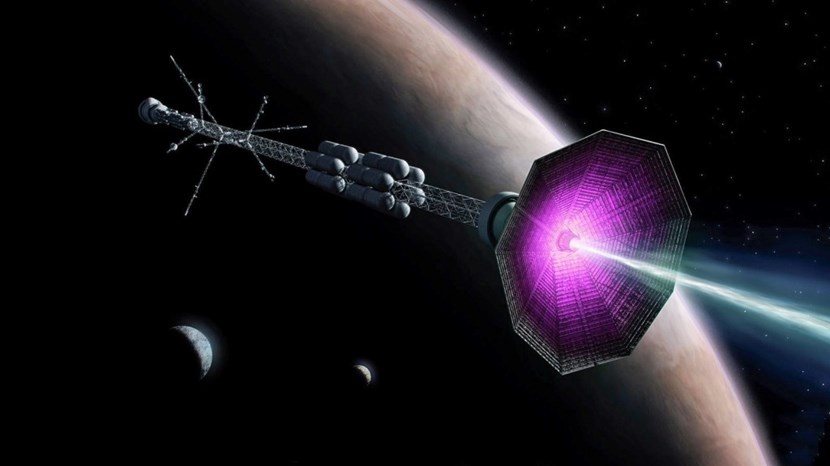 Fusion reactors are now contemplated as the heat source that could bring rocket propellant to extremely high temperature (and hence high-velocity exhaust) or expel ultra-hot plasma to provide thrust.
Fusion, which aims at "bringing the power of the stars to Earth," could also in a not-so-distant future help humans reach the stars from Earth.


At space agencies worldwide, in university labs, and at start-up companies, nuclear fusion propulsion is on the agenda. In the United States, Congress approved USD 125 million in funding in May for the development of nuclear propulsion rockets and called upon NASA "to develop a multi-year plan that enables a nuclear thermal propulsion demonstration" from both fission and fusion. The Russian space agency Roscosmos is working on a "plasma rocket engine" in collaboration with the Kurchatov Institute—a project "made possible by advances made in the study of plasma fusion processes. The Advanced Concept Team at the European Space Agency (ESA), in collaboration with European universities, is conducting a study on the feasibility of open magnetic confinement fusion propulsion. And China intends to develop a whole "fleet" of nuclear carrier rockets by the mid-2040s (without specifying whether they will be fission or fusion-propelled).


Rockets lift from their launchpad and vessels are propelled through deep space by the simple principle of action and reaction: heated exhaust gas is expelled at high speed through a nozzle and, in reaction, a thrust force is exerted on the vessel.


Conventional rockets are propelled by chemical combustion, which requires considerable amounts of fuel—liquid hydrogen and liquid oxygen, or kerosene-like propellant—that are ignited at different stages of the ascent into space. 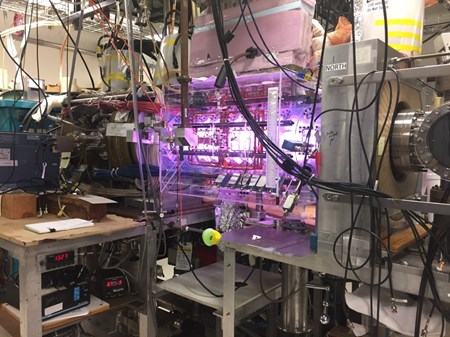 Academia and tech companies are teaming up to develop innovative fusion propulsion systems. Here, at the Princeton Plasma Physics Laboratory, PFRC-2—an upgrade of the original Princeton Field Reversed Configuration developed in the early 2000s that could be extrapolated to a direct fusion drive engine for space exploration.
Expelling hot gas is not the only way to provide thrust however: the father of modern rocketry Robert Goddard (who NASA's Goddard Space Center was named after) suggested in the 1900s that rockets could use electricity to eject electrons or charged ions with a velocity in the range of ~10 kilometres per second, twice as high as that of conventional exhaust gases.


Propelling rockets by atomic bombs, detonated at very short intervals at the rear end of a rocket, was at one point contemplated. From 1958 to 1963 Project Orion, funded by the US Advanced Research Projects Agency (ARPA, today DARPA), the US Air Force, the Atomic Energy Commission and to a lesser extent NASA, aimed at precisely that.


The ban on atmospheric nuclear tests in 1963 put an end to the project. Five years later however, in a Physics Today article titled "Interstellar transport," Project Orion's chief scientist Freeman Dyson suggested that "deuterium fusion explosions" would provide even more thrust and velocity to the bomb-powered rocket and spaceship.


Fifty years later, fusion is still a serious contender for space propulsion although not in its "explosive" applications. Fusion reactors are now contemplated as a heat source that would bring propellant to extremely high temperature (and hence high-velocity exhaust), or expel ultra-hot plasma to provide thrust.


Depending on the concept, the exhaust velocity of a fusion-propelled rocket would be in the range of 150-350 kilometres per second. Planet Mars could be reached in 90 days or even less, as compared to eight months with a conventional propulsion system. The intriguing moons of Jupiter and Saturn would be reachable in reasonable time and the way to exoplanets would open for exploration.


Using the power of fusion to propel rockets to speeds otherwise unattainable, and hence dramatically shortening the duration of space travel, may sound like the stuff of science fiction. And literally, it is: in the 2014 blockbuster Interstellar, the spaceship that carries passengers on a quest for inhabitable planets is fuelled by "compact tokamaks" which also provide the vessel's electricity. 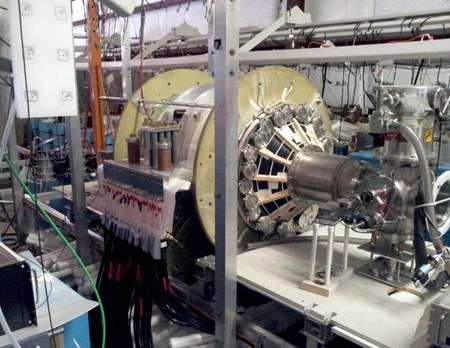 The Department of Aeronautics and Astronautics at Washington University has a longstanding program devoted to fusion propulsion research. Here, a fusion-driven rocket test chamber at the Department's Plasma Dynamics Lab.
One of the problems is that tokamaks, the most promising of fusion devices in the present state of fusion technology, are all but compact: at 23,000 tonnes (not counting the mass of plant systems), ITER would be difficult to put into orbit.


A fusion reactor, however, is not necessarily a tokamak.


A NASA-funded joint venture between the University of Washington in Seattle and a small company named MSNW LLC focused on the development of advanced space propulsion systems has developed a small field-reversed pulsed-fusion device  (akin to the spheromak concept of 1980s-1990s) to be extrapolated into a "fusion drive engine." Promoters of the project say that they are at work building the components of "a fusion-powered rocket aimed to clear many of the hurdles that block deep space travel, including long times in transit, exorbitant costs and health risks."


In a similar move, the Princeton Plasma Physics Laboratory (PPPL) has entered into a collaboration with a company called Princeton Satellite Systems to work on a direct fusion drive engine for space exploration. Two years ago, NASA awarded a half-a-million dollar grant to the venture, which was also distinguished by a US Federal Laboratory Consortium award in October last year.


In the projected direct fusion drive engine, fusion power would not be produced by the deuterium/tritium (DT) reactions of ITER or future electricity-generating plants. While the DT reaction is the most accessible in today's state of technology, it has two significant drawbacks, particularly for manned space exploration. Tritium is a radioactive element, and the fusion reactions produce a flux of highly energetic neutrons from which humans and electronic equipment must be heavily shielded.


The deuterium/helium-3 reaction that is planned for the direct fusion drive engine has neither of these limitations: both elements are stable and so are the reaction products, hydrogen and helium. As the reaction is "aneutronic," no heavy shielding would be required for protection.


There is, however, one big catch: the temperature required to fuse deuterium and helium-3 nuclei is about ten times higher than that required for DT fusion and no device has yet achieved this level of energy. (The present record is held by the Japanese tokamak JT-60U, which reached an ion temperature of half-a-billion degrees.)


The developers of the direct fusion drive claim that their engine could be operational as early as 2028, which might appear to be a wildly optimistic projection. It might take decades before fusion propulsion quits the realm of science fiction and enters the reality of space travel.


But among space-faring nations there is now a consensus, which the Department of Aeronautics and Astronautics at Washington University, one of the top aerospace schools in the United States, has clearly formulated: "Fusion energy is, in principle, the only conceivable source of energy for rapid, efficient, rocket space travel to Mars, the outer planets, and nearby stars."