Share Tweet
ITER Manga | Now in Provençal
Four generations ago, at the turn of the 20th century, regional languages were still very much alive in rural France. Breton was widely spoken in the Brittany peninsula, Basque in the southwestern Basque country, and Alemannic dialects in the provinces bordering Germany. In the villages around ITER, as in most of southeastern France, the daily language was Provençal, a Romance language that, like French, Spanish, Italian or Romanian, derives from Latin. 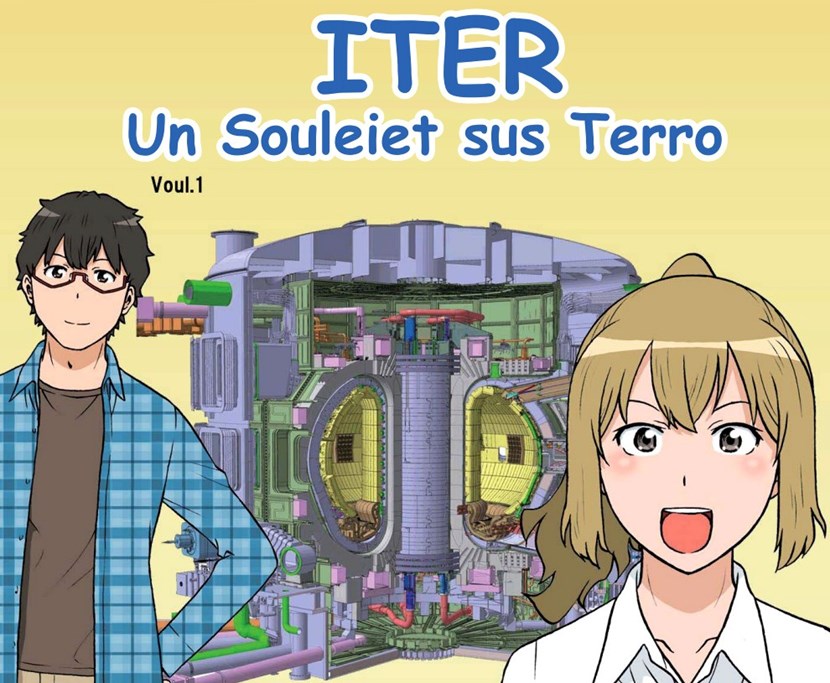 Taiyo the Japanese art student and Soléane, a ''scientist at heart'' working in fusion research meet at Paul Cézanne's studio in Aix-en-Provence. And very naturally start speaking Provençal...
In its literary form, Provençal has always held special prestige: it was the language of the Middle Age troubadours and of the poems and epics of Frédéric Mistral, who was awarded the Nobel Prize in Literature in 1904.


Today, Provençal survives through countless expressions and turns of phrases that permeate the French language. It is also kept alive by a growing community of enthusiasts who study classical Provençal literature, teach, write and publish.


A graduate of the prestigious École Polytechnique and an engineer in the ITER Tokamak Engineering Department, Thierry Cerisier belongs to this informal community. Contrary to many he was not exposed to Provençal in his childhood but developed, as a student, a strong intellectual attraction for the language. "I did a lot of personal work," he explains, "reading the classics as well as contemporary literature, which is considerable in both volume and quality."


Once a week at ITER, Thierry teaches a small class of a dozen students from France, Canada, the UK and Romania. Three years ago, he wrote the Wikipedia article on ITER in Provençal, and more recently decided to tackle an original challenge: translating into classical literary Provençal the manga that ITER Japan produced in April of last year.


Publishing a manga in Provençal conveys two messages. One is about challenging "the common cliché of Provençal as a dusty thing from the 19th century"; the other is a way of paying homage to Japan, where the major classical works have long been translated and literature departments in several universities provide classes in Provençal.


As, over the years, Provençal has been progressively marginalized as a spoken language, one might think that it is not particularly adapted to dealing with contemporary issues such as the energy crisis and the challenges of fusion. "You'd be surprised," says Thierry. "There are entries for deuterium and tritium in one of the major French-Provençal dictionaries and several articles on nuclear energy have been published in reviews and magazines."


The ITER engineer concedes that words or expressions such as "renewable energy source" or "atomic nucleus" required a bit of creativity and at times the creation of neologisms.


Thanks to enthusiasts like Thierry, the reality of today and the promises of tomorrow can be expressed in the language that poets used a thousand years ago to express the values of courtly love and chivalry. And the future is assured: to his two children, aged three and six, Thierry speaks exclusively Provençal.