Share Tweet
Cryostat base | Grand opening soon
Picture a giant soup plate, 30 metres in diameter, slowing descending into a deep concrete cylinder. Track the near imperceptible movement of the double overhead bridge crane, as it moves a few millimetres at a time to align the plate's rim with prepared supports 60 metres below. Feel the tension as the operation unfolds and the 1,250-tonne steel component eventually settles with submillimetre precision on the massive concrete "crown" waiting below. And mark your calendars, because what you have just visualized will be the opening act of ITER machine assembly this spring—the insertion of the cryostat base into the Tokamak pit.

Most of the elements of the cryostat support system are in place on the ''crown'' at the bottom of the assembly pit. Like precious jewels wrapped in velvet, the 18 ball-and-socket bearings are protected by thick black material.
The cryostat base, part of the insulating vessel that encases the ITER Tokamak, is the heaviest of all the machine components. As the first of four cryostat sections to be lowered into the Tokamak pit, it must be aligned with utmost precision as any departure from its nominal positioning would affect the entire structure of the 30-metre-tall cryostat.


Aligning such a large and heavy component to its predefined position requires a constant interaction between high-precision mechanics and laser metrology. "The crane itself is a high-precision tool, capable of micro-movements on the order of a few millimetres," explains Guillaume Vitupier, an engineer in the ITER Cryostat & Auxiliaries Group.


Throughout the load's descent, a set of laser beams from trackers located in the port cells that open into the pit will interact with metrology targets affixed to the component. Computed information from this three-dimensional system will be available in real-time to the crane operator, who will minutely adjust the movement of the girders and trolleys. "At any given moment, we will know exactly where the load stands relative to the referential," says Guillaume. 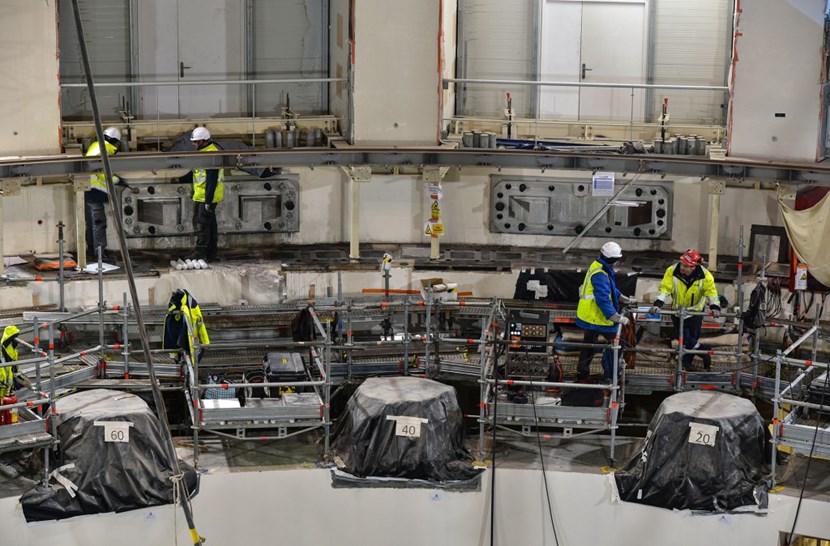 ''Female lugs,'' deeply anchored and bolted into the bioshield wall, provide transversal support—allowing the machine to ''breathe'' outward while countering any horizontal displacement. Like mortise and tenon, the 18 female lugs are designed to match the male counterparts that protrude from the cryostat pedestal rim.
The concrete "crown" upon which the cryostat base will ultimately rest is equipped with different types of supports, whose function is to maintain the component in place while accommodating the movement caused by the tremendous forces at work in the machine. As a consequence, the support system needs to be both extremely robust, with a strong connection to the Tokamak Complex basemat and bioshield walls, and yet flexible enough to allow some "breathing space" for to the colossal mass of the Tokamak enclosed in its insulating cryostat (23,000 tonnes).


A set of 18 spherical bearings, evenly spaced and deeply anchored into the "crown," will bear the full weight of the machine and, acting as ball-and-socket joints, will enable the smooth transfer of horizontal and rotational forces, whether stemming from normal operations, a vertical displacement event or an earthquake.


Another set of supports, anchored and bolted into the bioshield wall, complements the action of the bearings: 18 "female lugs"—designed to match the male counterparts protruding from the cryostat pedestal rim (like mortise and tenon)—will act as transversal support, allowing the machine to "breathe" outward while countering any horizontal displacement. 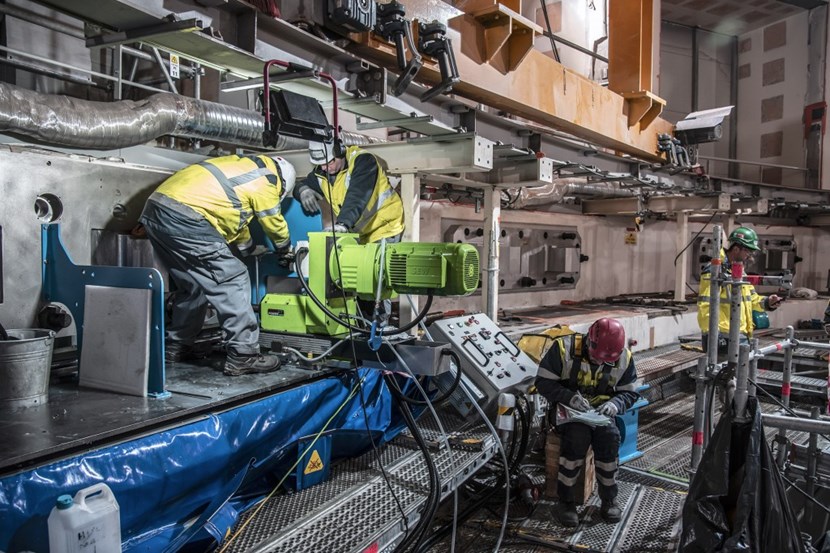 A high-precision drill is boring holes into one of the 18 female lugs to accommodate a steel pin. Steel pins are designed to withstand the shear forces that can be generated by the Tokamak's transversal movement.
However careful the controls and measurements performed throughout the manufacturing process, the "as built" reality of a component (especially one as large as the cryostat base) always presents some degree of deviation from its reference design. At the points of interface between the component and its supports, it is absolutely crucial to compensate for these minute variations.


When the component has been lowered to a distance of some 6 to 7 centimetres above the bearings, the load will be progressively transferred from the crane to a set of 12 vertical hydraulic jacks. "At this point, we will be able to survey the deviation of the 'as-built' interface and proceed to the machining of tailor-made shims," says Guillaume. A similar operation will be performed at the male-female lug interface, this time with horizontal alignment jacks.


From the moment the overhead crane positions the cryostat base vertically above the pit to the final positioning of the load, one or two days will elapse—the first act of a grand, complex and delicate enterprise, ITER machine assembly, that will end in late 2024.