A colossus at the centre of the Tokamak pit 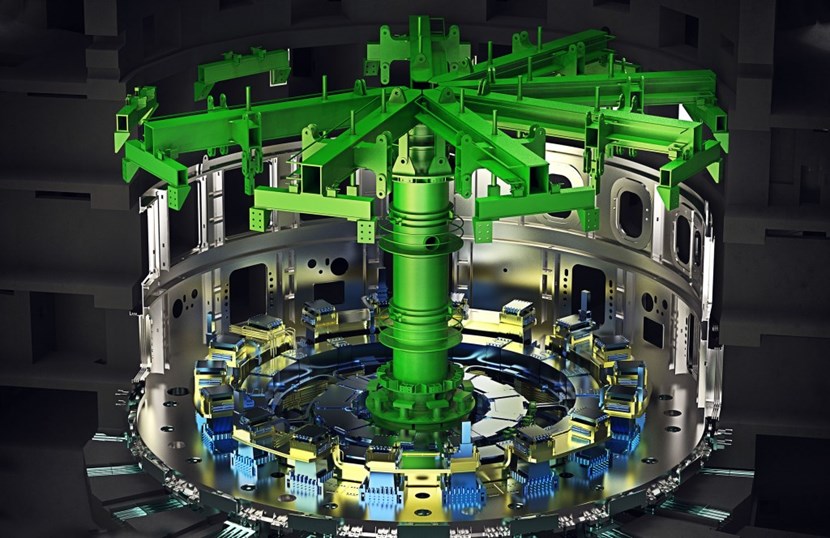 This towering, 600-tonne in-pit assembly tool will support the weight of the vacuum vessel subassemblies as they are progressively assembled and welded in the Tokamak Pit.
Together with the giant sector sub-assembly tools (SSATs) and the upending tool, the in-pit assembly tool is the third major purpose-built tool supplied by ITER Korea for activities related to the assembly, including in-field joints, of the vacuum vessel sectors.


The three tools are closely associated:


The central column—25 metres tall, 5 metres in diameter—is anchored directly to the Tokamak Complex basemat through an opening in the cryostat base, while the radial beams are supported by the central column on one side and the concrete bioshield on the other through brackets embedded in the L2 level of the bioshield wall. 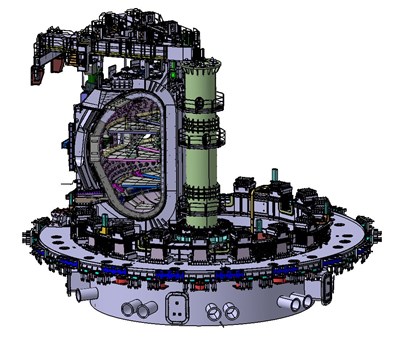 The central column, anchored directly to the concrete floor of the Tokamak Building, will partially support of the dead weight of the sector sub-assemblies; the radial beam will support the rest. The beams will be installed in the Tokamak pit until they are needed—each one retrieved by overhead crane to connect with a vacuum vessel sector. Once joined, the beam and the sector will remain associated until the finalization of all in-pit welding joints between sectors.
The tool is designed to support a total nominal weight of 5,400 tonnes.


In addition to its weight-bearing role, the central column of the tool will also provide a physical reference of the machine axis, by which all toroidal field coils can be adjusted precisely.


Vacuum vessel adjustment and alignment units—located on the radial beams—will allow operators to align the position of each sector for in-pit welding, and align the sectors against the toroidal field coils.


Finally, the central column will provide contractor access to assembly activities in an extremely crowded in-pit environment. Although strengthened by interior ribs at regular intervals, the interior of the column is essentially hollow, and will be equipped with interior ladders, traps and staging at four levels.


Manufacturing on the in-pit assembly tool is progressing now in Korea at Yujin Machinery in Changwon and factory acceptance tests are scheduled for November. If all goes as planned, the tool will reach ITER before the end of the year.


Tool assembly will begin after the installation of the cryostat base in the Tokamak pit next spring. Following the assembly of the central column, a comprehensive metrological survey will be performed to measure the as-built position before reception of the first vacuum vessel sub-assembly.