Share Tweet
Roof modules | Patience, precision and a crane's long arm
In the spring of 2020 a new and strategic phase of ITER construction will begin: the assembly of the ITER Tokamak. In order to deliver machine components to the assembly pit, a new volume—the crane hall—will be created at the top of the Tokamak Building and the rails of the overhead bridge cranes extended. 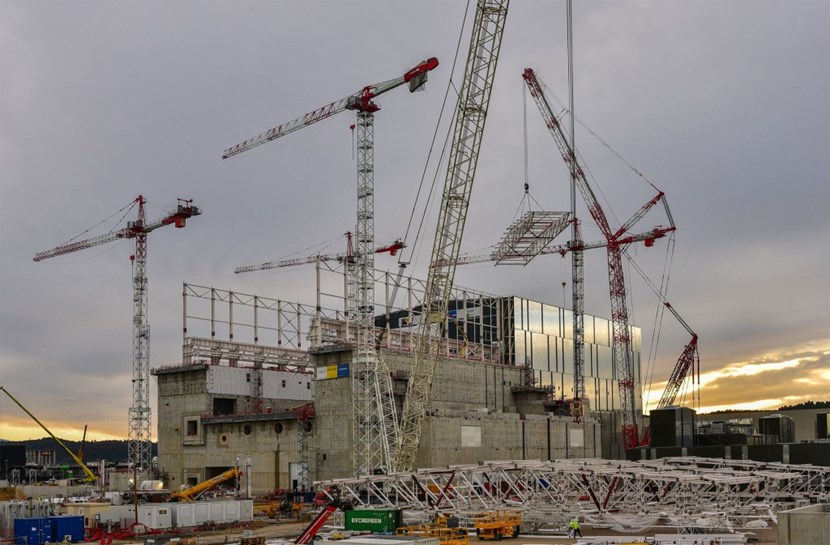 In the wee hours of 4 December, as the air was perfectly still and temperature just above zero degrees Celsius, the crawler crane extended its long arm, picked up the first module and lifted it slowly above the massive walls of the Tokamak Complex to the supporting columns.
In September, the first pillar segment of the crane hall's steel structure was installed and deeply anchored into the "corbel" at the top of the Tokamak building. Less than three months later, with 20 tall pillars solidly in place, the time had come to install the roof structure—five "modules" weighing between 62 and 78 tonnes and spanning the 50-metre distance between the two parallel rows of supporting pillars.


The operation had been more than a year in preparation. Lifting such large structures is not just about lifting; care must also be taken in the planning of activity sequences and in coordinating works in the operation's vicinity. Unpredictable parameters—such as the force of the wind or the impact of the national strike in France on the day following the first lift—had to be taken into consideration.


The roof modules had been pre-assembled on the ground about 30 metres from the Tokamak Building. Delivering them from there to their final position on top of the waiting pillars was a challenge that only a very specific type of crane could meet. Months ago, a crawler crane with a boom extending more than 100 metres was assembled on site and positioned alongside the Tokamak Complex. It was first used to lift and position the relatively "light" elements of the columns and rail supports.


In the wee hours of 4 December, as the air was perfectly still and temperature just above zero degrees Celsius, the crawler crane extended its long arm, picked up the first module and lifted it slowly above the massive walls of the Tokamak Complex to the supporting columns. For a long moment, the triangular shaped steel structure hovered in mid-air as operators pulled on ropes to pre-align it with the anchoring system on top of the columns, where other operators standing on elevated platforms were waiting to perform the final adjustments.


The operation was a patient and highly precise one—two and a half hours for lifting the first module and berthing it, within tolerances of less than one centimetre, on its supports 70 metres above ground. A second module followed suit in the afternoon and a third one on Friday.


Two more remain to be lifted. Once the five modules are in place and connected to one another, the rails for the bridge cranes will be extended from the Assembly Hall and installed on the thick runway beams running the whole length of the crane hall. For a few months, the Tokamak Complex will look like a big mass of concrete topped by a thin, almost fragile-looking steel skeleton.


Then, as winter turns into spring, the crane hall will progressively don its final cladding of mirror-like stainless steel and grey-lacquered metal—the architectural signature of the ITER installation.


The lifting and berthing operation was performed under the responsibility of the European Domestic Agency Fusion for Energy. It was coordinated by architect-engineer Engage and implemented by contractors VFR (overall responsibility and coordination), Martifer (manufacturing and installation of the steel structure) and Vernazza (lifting operations).


Click here to view a time-lapse video of the lifting operation on 4 December.

In the magic light of dawn, the Tokamak Complex looks like a giant harvester, all geared up to gather the fire of the Sun.

A question of balance

Carefully balanced under the crawler crane's hook, the 62-tonne roof module is being slowly lifted and manually aligned by operators pulling on a set of ropes.

It took two and a half hours to lift and berth the first module, within tolerances of less than one centimetre, on its supports 70 metres above ground.

A crawler crane, with a boom extending more than 100 metres horizontally, was required to lift the modules from their pre-assembly area, some 30 metres from the Tokamak Building, to their final position on top of the supporting columns.