Share Tweet
Image of the week | "Bringing light and hope"
Most international organizations are headquartered in large cities—the UN in New York, UNESCO and the International Energy Agency in Paris, the IAEA in Vienna, or the World Health Organization in Geneva. The ITER International Fusion Energy Organization, in contrast, has its home in a small village in Provence, with a population of less than 1,000 souls. ITER today has more staff than Saint-Paul-lez-Durance has inhabitants. 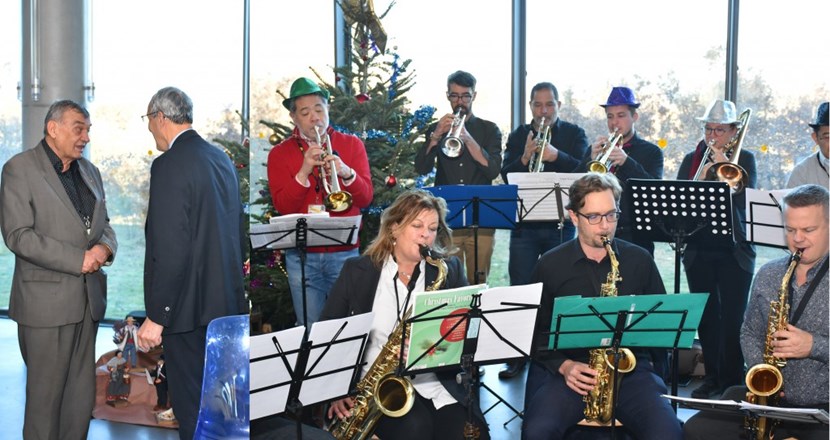 Every year since ITER moved into its Headquarters Building in 2012, Mayor Pizot (left, in conversation with ITER Director-General Bernard Bigot) has offered the traditional fir tree that, once lit, symbolizes Nature's rebirth.
This unique situation has created a special relationship between ITER and Mayor Pizot, who has been heading the village council since 1995. As early as 2001, Mayor Pizot was instrumental in organizing support and local government funding for the project. He has always wanted to "serve ITER as ITER is serving Saint-Paul."


And so every year since ITER moved into its Headquarters Building in 2012, Mayor Pizot has offered the traditional fir tree that, once lit, symbolizes Nature's rebirth.


"Let us enjoy this tradition together, and let us celebrate the generosity of our neighbours in Saint-Paul-lez-Durance," said ITER Director-General Bernard Bigot. "This tree will brighten our lobby in the dark season, and remind us that our work here at ITER is about bringing light and hope to the planet."


Then, also in keeping with tradition, the ITER band began to play ...