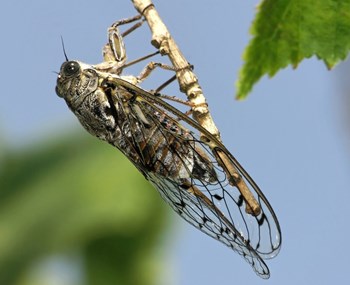 
Whether you call it noise or music, the cicada song is a love call. It is the eternal story of the male seeking his partner, and not being very discreet about it at that ...


Unlike crickets, who rub their legs together to produce a "stridulation," male cicadas possess a special membrane, called a "timbal," that they contract and relax at very high speed.


Amplified by their abdomen, which is almost hollow, the fast-following clicks create the deafening noise that is characteristic of summers in Provence.


But so much for entomology ...


Besides being a symbol of Provence—one can find kitsch ceramic cicadas in just about every tourist store—the cicada is synonymous in the French language and culture of mindlessness and insouciance. And this is all due to Jean de la Fontaine (1621-1695).


One of the most famous pieces of the French fabulist, called La Cigale et la Fourmi, generally and wrongfully translated in English as "The Cricket and the Ant", features the thrifty, hard-working little ant who spends his summer collecting food for "when the north wind doth blow," and the happy-go-lucky cicada who does nothing but "sing her song all summer long." 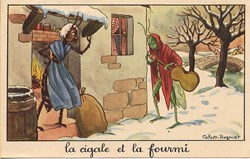 Every schoolchild in France knows by heart La Fontaine's fable ''The Cicada and the Ant,'' a parable about the virtue of work and saving.
When winter comes, the cicada goes begging to her neighbour the ant "for a little grain 'til summer comes back again." The ant in the fable however, being self-righteous and stingy, replies with: "You sang did you?" ... "Well, dance now!"


Every child in France learns this fable by heart at primary school. This is why only foreigners rejoice in the summer song of the cicada. For all former French schoolchildren, it is the sound of an impending drama—the winter starvation of the carefree cicada.