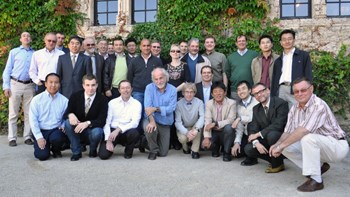 The main actors in conductor production have got into the habit, since 2008, of meeting twice a year here in Cadarache.
More than one hundred tonnes of niobium-tin (Nb3Sn) superconducting wire, all destined for the ITER toroidal field coils, have now been produced by the six ITER Domestic Agencies (China, EU, Japan, South Korea, Russia, and the US) responsible for toroidal field conductor procurement.


These 100 tonnes, about half of which come from Japan, amount to 25 percent of the total wire length (80,000 km!) that is required for ITER's 18 toroidal field coils, each as heavy as a fully loaded Boeing 747.


Niobium-titanium (NbTi ) superconducting wire production for ITER's poloidal field coils will begin next month, and by 2012 the first jacketed cables should arrive on-site for magnet winding.


This operation will be performed in the dedicated 250-metre-long building whose construction began early in August on the ITER platform.


Coordinating the conductor fabrication, implementing quality control, and dealing with the many issues that inevitably arise in such a complex and delicate process require a lot of interaction between the ITER Organization, the six Domestic Agencies and their industrial suppliers.


In order to closely monitor this process worldwide, video conferences and visits are organized on a regular basis and dozens of emails and phone calls are exchanged everyday. 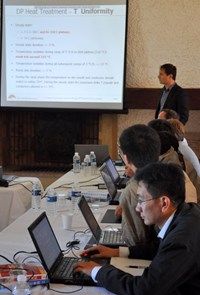 A discussion on temperature variation tolerance during ramps— Alexander Vostner (ITER) does the presentation while Sheng Liu (Chinese Domestique Agency) takes notes.
But because nothing can replace personal contact and face-to-face negotiation, the main actors in conductor production—ITER Organization Magnet Division personnel, Domestic Agency Technical Responsible Officers, and representatives from industry—have got into the habit, since 2008, of meeting twice a year here in Cadarache.


"Gathering everyone involved in the same room for three days, having lunch together, looking for common ground and eventually finding it, creates a strong motivation," says Superconducting Systems Section Leader Arnaud Devred. "A video conference would never achieve the same results."


These "Conductor sub-IPT" meetings (IPT for "Integrated Project Team"), according to Arnaud, play an essential part in the "ability to produce" and in the success of the whole operation.


Such a meeting was held this past week in the Cadarache Château's Salle des Armures and gathered some 30 representatives from all the Members involved in toroidal field, poloidal field, and central solenoid conductor production. "We discuss dimensions, tolerances, tests and examination; we review, we deal with what we call 'deviation requests' ... we come out with guidelines for standardized procedures," says Arnaud. "We try to understand each other's point of view and we accommodate."