Arnaud Devred, Leader of the Superconductor Systems and Auxiliaries Section 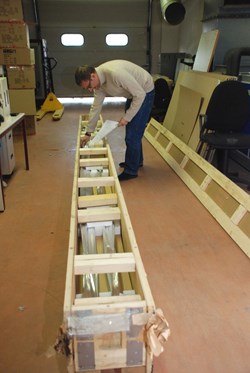 Arnaud Devred checking the first five-metre archival sample of toroidal field conductor being shipped from Japan to Cadarache. With each unit length produced, a sample has to be cut out and sent to Cadarche for storage.
It all began in late 2007 when the first Procurement Arrangements of the ITER Project were signed for the cable-in-conduit conductors of the toroidal field coils at the heart of the ITER Tokamak.


The making of these conductors is remarkable in many ways. First, their manufacturing involves no less than six Domestic Agencies: China, Europe, Japan, Korea, Russia and the US. Second, their scope is unprecedented as they call for the production of more than 400 tonnes of copper and niobium-tin (Nb3Sn) multifilament composite wires.


Nb3Sn has excellent superconducting properties and can be operated in magnetic fields in excess of 20 Tesla. But once formed, it becomes brittle and strain sensitive. This sensitivity had always limited its industrial applications and, before ITER, its world production was estimated to 15 tonnes per year.


Also, when the toroidal field conductor Procurement Arrangements were launched, the project was still in its early days and none of the quality assurance and control procedures were in place.

Almost three years down the road, seven suppliers around the world are now massively producing Nb3Sn wires: two in Japan, one in Korea, one in Russia, one in Europe, and two in the US. In addition, the Chinese Domestic Agency recently qualified a domestic supplier that is expected to start production later this year. A significant milestone was achieved last month, when the cumulated amount of strands produced by the seven suppliers crossed the 100-tonne mark, representing about 25 percent of the total amount needed for ITER. For those who would rather visualize this volume in length rather than in weight: the overall production of Nb3Sn wire has exceeded 21,000 kilometres.


Cross-sectional view of internal-tin type strand. The dark areas are an effect of the sample preparation. Photos courtesy of Peter Lee, Florida State University.
Getting this production started was not easy. It took 19 months for all six Domestic Agencies to sign their respective Procurement Arrangements within the ITER Organization. The conductor project team at ITER has had to pioneer reporting, document handling and quality assurance procedures. As of today, no less than 800 documents have been uploaded for the toroidal field conductor Procurement Arrangements. The most critical among them have undergone a review and approval process, which required iteration with the Domestic Agencies and their suppliers. 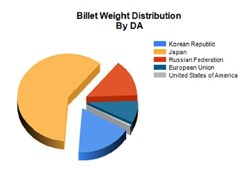 Distribution of strand produced by the Domestic Agencies involved in toroidal field conductor production. The chart shows the status end of September this year. China has now also qualified its domestic supplier and will start the production at the end of the year.
In addition, a web-based Conductor Database has been developed by the ITER IT group to store critical manufacturing and acceptance test data and enable the Domestic Agencies and the ITER Organization to check their compliance with requirements and to clear the control points that punctuate critical production steps. This secured Database is now routinely used by all suppliers across the six Domestic Agencies. It contains more than 69,000 objects of 149 different types and over 1,000 control points have been electronically cleared by the Domestic Agencies and/or the ITER Organization.


Cumulated Nb3Sn strand production for toroidal field conductor across all Domestic Agencies versus need dates for start of cabling.
My main reward in this job is to see the workshops near the Ural, on Kyushu island in Japan or near the ancient Chinese city of Xi'an bursting with activity and reels of barcoded ITER wires ready to be shipped to cable suppliers. I am also amazed that—together with the six Domestic Agencies—we have been able to develop a common monitoring system and to implement nearly identical quality control procedures that ensure that the wires produced by so many different suppliers achieve the same required performances. The Nb3Sn wire production is expected to continue until 2013, with the first contracts coming to an end in 2012.