Looking at ITER both ways 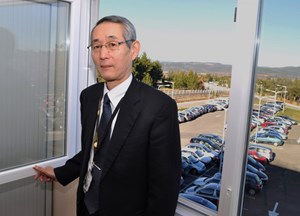 A mechanical engineer by training, the recently appointed CIE Head brings to ITER a rare expertise: that of a ''fusion industrialist.''
You can look at ITER two ways. One is that the project is a very large scientific experiment in plasma physics and related technologies. The other is that ITER is a tremendously complex machine that should open the way to a fusion prototype and, beyond that, to the industrialization of fusion energy.


Of course, in order to grasp what ITER is really about you have to look at it both ways at the same time, and this can be conflicting.


Reconciling the needs of the physicist and the constraints of the engineer, those of science and those of industry, is not an easy task. But it is an essential one: failing to do this would put the project in peril.


Every large science project has to face this kind of dilemma.  At ITER's present stage of advancement it is Mitsunori Kondoh's job to contribute to solving it.


Two weeks ago, Kondoh was appointed Head of the Central Integration and Engineering Office (CIE) which manages all technical integration and project-wide engineering items.


A mechanical engineer by training, Eisuke Tada's successor as CIE Head brings to ITER a rare expertise: that of a "fusion industrialist."


Research and industry, in Japan, have a tradition of working hand in hand. At Toshiba, which he joined in 1980 and left just before being recruited by ITER, the new CIE Head was involved in several large fusion projects — the "proto-ITER" INTOR project in the early- to mid-1980s, the ITER Conceptual Design Activities (CDA) and Engineering Design Activties (EDA), the construction of the Large Helical Device (LHD) stellarator and, until early this month, the upgrading of JT-60 U into JT-60 SA.


In 1994, Mitsunori Kondoh joined the ITER Joint Works Site in Naka, a division of which was then headed by Remmelt Haange the recently appointed ITER Deputy Director-General and Head of the ITER Project Department. "Rem was my boss then; sixteen years later he will be my boss again."


Mitsunori Kondoh comes to ITER with some very strong opinions on how to manage the construction phase of the project. "I will reconstruct CIE," he says, "in order to accelerate ITER construction."
As a fusion engineer and former project manager, he intends to observe the "three commandments of industry": cost, schedule and quality control.


One of Kondoh's first decisions upon arriving at ITER was the establishment of a task force of some ten engineers who will be directly recruited from the Members' industries. The new CIE Head expects them to come up with suggestions on how to rationalize and simplify the design of several of the machine's components.


Like everyone at ITER, Mitsunori Kondoh has his eyes fixed on November 2019. However, his vision goes far beyond First Plasma. "My perspective," he says, "is clearly that of the prototype reactor that will follow ITER. The more we contain the cost of ITER, the more money will be available when the time comes to build DEMO. And for some of the ITER Members, Japan among them, it is vital to have a DEMO ready by 2030."