The climax of a fusion scientist's career 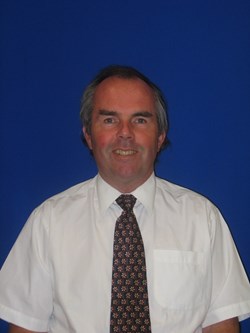 Paul Thomas, the new Head of the ITER Heating & Current Drive Division.
According to the lyrics of a famous song written in 1932 by Noel Coward, it must either be a mad dog or an Englishman going out for a stroll in the baking midday sun. In the present case, it is most certainly an Englishman who interrupts his portrait interview to be on time for a lunchtime picnic appointment with his wife—despite the fact that it is bucketing down on this grey day in early January.


Paul Thomas certainly carries all the attributes of an English gentleman and an honorable scientist who started his professional career at Manchester University with first class honours in physics and a PhD in theoretical physics. From England's northwest, Paul moved to post-doctoral fellowships at the University of California Irvine and the University of Cambridge, where he continued his work in high-energy physics and field theory ... only to find out that "exceptional groups" were not really his cup of tea.


In 1978, Paul opened a new chapter of his life—his "stellarator days" as he calls them—by moving to Culham to work on the CLEO stellarator, which at the time was known as "the sleepy valley." But that was about to change. Paul, together with other new arrivals Peter Lomes and Peter Johnson, "... livened the place up, and managed to get some good results too!" During this time Paul made the acquaintance of two people that he would run into again in the course of his career: John How, who was working on Wendelstein in Germany, and Osamu Motojima, now the ITER Director-General, who was working on the Heliatron device at Kyoto University.


Paul's career in stellarators was terminated by Roy Bickerton, then Associate-Director of the Joint European Torus, who pulled him over to join the team at the JET, which at the time had been under construction for six months. "Together with Chris Schuler, I planted the seed of the plasma operations group." Due to a shortage of staff with real plasma operations experience, Paul was sent off to Princeton in November 1980, where he spent a year on the Poloidal Divertor Experiment (PDX) followed by a stopover at General Atomics in San Diego. He returned to the UK to find the JET team "in the final throws of panic about construction and First Plasma." Not long afterwards, another long-term colleague and collaborator joined the Plasma Operations Group—Arturo Tanga.


Over the following years, Paul together with Arturo and Peter Lomas developed the path for the first H-modes on JET and many of the achievements that have made JET a world leader to this day. He is particularly proud of his lead role in the experimental demonstration of alpha-heating of DT plasmas. In the summer of 2000, widowed and with two grown sons, Paul remarried and moved to France. At the CEA in Cadarache he worked on the development of the ergodic divertor concept towards a solution for controlling edge localized modes (ELMs), studied ion heating by alpha particles and led a diagnostic group.


His involvement with the ITER Project began with a position as Chairman of the Physics Objectives and Design Requirements working group of the ITER Design Review performed in 2007, and as Secretary of the Technical Advisory Group (TAG) to the ITER management.


Early in 2008, he moved to Barcelona to take on the job of Head of the Heating & Current Drive, Diagnostics, CODAC and Plasma Engineering Division at Fusion for Energy, the European Domestic Agency for ITER. It was a period he describes as "a roller-coaster ride"—a "trying time professionally but also a tremendous learning experience."


In autumn of 2010, Paul crowned his professional career by joining the ITER team as Head of the Heating & Current Drive Division. This post had become vacant after the tragic car accident in which Arturo Tanga lost his life in December 2009. "ITER is the culmination of 50 years of work in controlled fusion research," Paul says. "The preparation for ITER was, to a very real degree, central to my 20 years at JET and naturally I look forward to direct participation in the project."


And now please excuse him ... he has an appointment with his wife ...