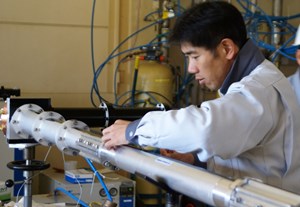 Koji Tajahashi (JAEA) is completing the installation of a transmission line before gyrotron tests.
Gyro is ancient Greek for "circle," and tron—abstracted from "electron"—has been used since the late 1930s to name newly formed physics compounds.
Now, if you want to name a device based on the rotating motion of electrons, gyro and tron come in quite handy. By calling such a device a "gyrotron" you will convey a very clear notion of the principles it is based upon.
In a gyrotron, beams of electrons are accelerated toward a cavity where a strong magnetic field is applied. The interaction between the rotating (cyclotron) motion of the electrons and the magnetic field generate high-frequency radio waves that "travel" in a straight line, almost like an optical beam.
Gyrotrons are powerful devices that have very few applications: industry uses them as heating tools to process glass, composites and ceramics; in magnetic fusion, they contribute—along with ohmic and neutral beam heating—to bringing plasmas to the temperature necessary for fusion.
Gyrotrons are, essentially, energy-delivery devices.


Once generated in the magnetic cavity, high-frequency waves travel the length of a wave guide into an antenna that directs the beam into the plasma. The effect of the high-frequency wave on the electrons in the plasma is to accelerate their motion—another way of saying that electrons are "heated" by the high frequency beam.


The energy that the electrons have acquired is then transferred, by way of ions, to the whole plasma. This heating technique is called electron cyclotron resonance heating (ECRH). In ITER, the ECRH system will be composed of more than 20 gyrotrons which will deliver a combined heating power of 24 MW. 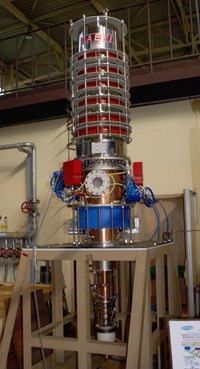 In Lausanne, Karlsruhe, Moscow, Nijni-Novgorod, Naka and soon in Ahmedabad gyrotron prototypes are being fine-tuned, and test beds readied.
"The area of the plasma that is impacted by the beams is rather small," explains Caroline Darbos, an engineer with the ECRH team, "but the energy spreads fast and evenly. The beams accelerate the electrons in the plasma, which, while generating current, communicate their newly acquired energy to the ions."
High frequency beams fulfil a second important role in fusion devices: when aimed precisely by way of a mobile mirror system, the current that is generated by the electrons can also suppress local instabilities in the plasma.


The ECRH system is presently in its conceptual design phase, and India, Russia, Japan and Europe are all developing prototypes for the ITER gyrotrons. For three days in January, representatives of these four countries met at ITER to report on progress on the ECRH and high-tension power supply systems (the power supply's characteristics are directly related to those of the gyrotrons).
"Progress is constant," says Darbos "but we are all working at the limits of technology. We have no experience in steady-state gyrotron operations: the DIII-D tokamak operated by General Atomics in San Diego has experience with high frequency pulses of a couple of seconds only, and the Wendelstein 7-X Stellarator, which will implement 10MW of steady-state gyrotron power, is not yet operational."
The difficulties are real and there is still a long way to go between prototypes and serial production. However in Lausanne, Karlsruhe, Moscow, Nijni-Novgorod, Naka and soon in Ahmedabad, prototypes are being fine-tuned and test beds readied.


Late this year or early in 2012, a first gyrotron Procurement Arrangement should be signed with Russia.