Another multi-billion-euro project in Provence 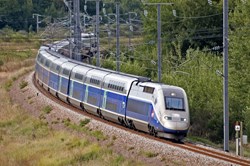 
As Western Europe's high-speed network keeps expanding, fixing the problem of this "missing link" has become a priority for public authorities, both national and regional.


After several years of study and some squabbling about the railway route, a final decision was reached seven months ago: new TGV tracks will be laid that will shorten the voyage from Marseille to Nice to one hour, and that of Paris to the Riviera's capital to less than four hours, from five hours and 40 minutes previously.


Known as "LGV (Ligne à Grande Vitesse) PACA", the project comes with a hefty price tag: the total required investment is on the order of 15 billion euros, including the upgrade of the local railway network.

By 2023-2025, the French Riviera's capital and France's fifth largest city (pop: 350,000) will be less than four hours from Paris.
That almost makes ITER look like a bargain.


Unlike ITER, which is funded by seven partners representing 34 nations, the bill for the LGV-PACA project will be footed by France alone.


The new high speed train connection could be operational by 2023-2025. It already makes Provence the only French region to host two multi-billion-euro projects.