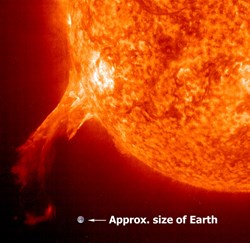 Large solar flares, like those observed in 2003 and expected again in the coming years, can account for 16% of the total energy that the Sun outputs every second.
What is above is like what is below; some of the phenomena that happen at the surface of the Sun are very much like those that occur, here on Earth, in fusion plasmas.


Take solar flares, for instance. These gigantic spurts of magnetized plasma periodically arch along the Sun's magnetic lines, reaching as high as hundreds of thousands of kilometres, or 10-15 times the diameter of the Earth.


Large solar flares, like those observed in 2003 and expected again in 2012, can account for a significant percentage of the total energy that the Sun outputs every second.


Solar flares are the stellar equivalent of edge localized modes (ELMs) observed in fusion plasmas. Observing what happens on the Sun's surface—and there are several satellites doing precisely this—can help understand what a June 2007 Topical Review article in Plasma Physics and Controlled Fusion called one of "the most intensely studied and least understood phenomena in divertor tokamak plasmas."


Solar flares are worrisome for earthlings just as ELMs are worrisome for plasma physicists. The sudden bursts of plasma that erupt from the Sun's surface release both a magnetic wave and a flux of very energetic particles that, after travelling three days through empty space, eventually collide with (and fortunately are diverted by) the Earth's magnetic field—the "magnetosphere".


The magnetosphere that encases the Earth in a protective shield is not absolutely foolproof: satellites in Earth's orbit can suffer from the flares' incoming magnetic wave and particle flux; radio communications can be disrupted; electrical grids can experience partial outage; and airline personnel and passengers—not to mention astronauts in the Space Station—can be submitted to high levels of radiation.
ELMs are of course a zillion times less energetic than the smallest of solar flares and their effect remains confined to the vacuum vessels of fusion devices. However, in a similar manner to solar flares, ELMs deposit their considerable heat load on the components that protect the reactor vessel walls from the plasma, accelerating their erosion and releasing impurities into the plasma. 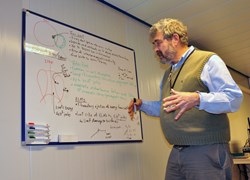 
"There are two questions we have to answer regarding ELMs," explains Wayne. "Can we find out why they're happening? And can we get rid of them or reduce their size to manageable levels?"


Solar flares are triggered by magnetic events; this is about as far as the "why they're happening" can be answered today. "Most of the time," says Wayne, "solar flares originate in sun spots—the colder areas on the surface of the Sun that are the seat of intense magnetic activity. Sun spots are a bit like the "magnetic islands" we encounter in fusion plasmas."


Solar observation by satellites such as the ESA-NASA Solar and Heliospheric Observatory (SOHO) or the Japanese-led mission Hinode (the Japanese word for 'Sunrise') should complement the knowledge of solar flares in the coming years as solar activity is expected to reach an all-time high.


As to the second question, fusion physicists have yet to find a way of getting rid of ELMs reliably. However, they have developed tools and techniques that can mitigate them or eliminate them under some conditions. "We need to be able to relieve the pressure in the fusion plasma by providing 'leaks' that will enable the extra energy to be evacuated," explains Wayne, "...something that acts like a pressure-relief valve in a water heater." 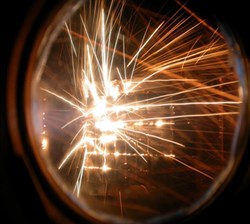 Molten tungsten droplets ejected from an EU mock-up of the ITER divertor target as it is being exposed to power fluxes similar to those that unmitigated ELMs would generate in ITER. The experiments were carried out under an EURATOM-ROSATOM cooperation agreement at the TRINITI laboratory in Moscow.
In ITER, two mitigation schemes will be implemented. While very different in nature, both aim to provide controlled escape routes to the excess energy in the plasma.


In what Wayne calls the "rapid fire approach", micro pellets of frozen fuel will be injected at the plasma edge to create small areas of higher pressure through which nascent ELMs will escape. Such a technique has been experimented with some success in the ASDEX Upgrade Tokamak in Germany in the DIII-D machine in San Diego and in the European JET in the UK.


In the second approach, escape routes will be provided by local perturbations of the magnetic field that specific coils (ELM coils) will induce at the plasma's edge.


In both ELM mitigation strategies, the idea is to "open the valves" in a controlled manner, before the pressure in the plasma reaches the level where damaging ELMs will erupt.


Physicists are confident they will eventually find ways of controlling ELMs and, possibly eliminate them completely. As for solar flares, they will continue to erupt following an 11-year cycle that is still not completely understood—another plasma physics riddle waiting to be solved...