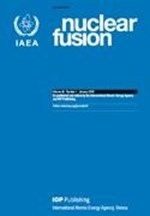 Nuclear Fusion is acknowledged as the leading journal specializing in fusion physics. It is published monthly by the International Atomic Energy Agency (IAEA) in cooperation with IOP Publishing. The journal, first published in 1960, covers all aspects of research, theoretical and experimental, relevant to controlled thermonuclear fusion.
Typically, the journal registers approximately 10,000 full text downloads a month across all its volumes.  But when Issue 6 of Volume 47 was published in June 2007—a special edition focusing on the "Progress in the ITER Physics Basis"—records were broken with over 17,000 downloads that month, of which about 10,000 were from the special issue articles. "We distributed many hundreds of copies of this issue and the number of downloads and citations has been impressive," says Sophy Le Masurier, of the IAEA's Publishing Section.


The special edition, "Progress in the ITER Physics Basis" (PIPB), assembled by many members of the seven International Tokamak Physics Activity (ITPA) Topical Physics Groups and the then ITER Joint Central Team (JCT), was prepared as an update to the highly successful "ITER Physics Basis" (IPB), published in 1999 and the product of the ITER Physics Expert Groups and JCT. Both volumes required very substantial coordination efforts, extending over several years, by the Chairs and Co-Chairs of the Topical Groups/ Expert Groups to encourage and cajole their group members (and additional experts in the international fusion community) into writing the many sub-sections of each chapter of the special issue volumes.


The Chairs and Co-Chairs also worked closely with the Editorial and Referee groups nominated to edit and review the final drafts of the chapters in order to bring the volumes into their final forms. The extensive efforts of the many contributors from the fusion community and the ITER team, often carried out in addition to their normal research activities, has proved a worthwhile investment, as both the original IPB and the updated PIPB have provided snapshots of the contemporary status of tokamak fusion physics research which are unequalled in their scope—and which are highly regarded across the fusion community, as evidenced by the record number of downloads for the more recent volume.


To date, there have been a total of over 30,000 downloads of articles in this issue and more than 600 citations have been made. "The work of the authors and the referees as well as the Editorial Office here in Vienna and the publishing professionals of IOP produced an issue that everyone was extremely proud of," Sophy Le Masurier recalls. "It has been a huge success and the citations contributed to the journal's highest ever impact factor of 4.2."


We thank David Campbell, Directorate for Plasma Operation, for his contribution to this article.