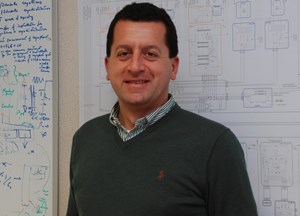 Former Section Leader for the Cryogenic System at ITER, Luigi Serio has been appointed Plant Engineering Division Head.
As a young man growing up in southern Italy, Luigi Serio had already determined his choice of career. Nuclear engineering combined the math and physics that interested him, as well as more practical studies. But in Putignano, "known for its Carnival—but not much in the way of nuclear engineering," his options were limited. And so began a journey that was to lead Luigi to Milan, Oxford, Geneva, and finally southern France, where he has just been appointed Plant Engineering Division Head for the ITER project.
His early timing left a little to be desired, though. While he was a Master's student at the Politecnico di Milano, Italy voted by referendum to abolish nuclear power. Unlike the majority of his classmates he stuck with the field, and then went on to a PhD program at Cranfield University in the UK.


He looks back on the five years at JET that followed as a very valuable part of his training. "At JET, I was exposed to a wide variety of challenges. I began in diagnostics, and then moved on to work on the tritium plant and the cryogenic forevacuum system. Things that I learned then are serving me well today," says Luigi. He won a patent during this time for a new method of tritium accounting.


Luigi was offered a position at CERN in 1994. "It was the R&D prototype stage at the Large Hadron Collider ... an exciting time," he recalls. "We were able to successfully demonstrate the operation of the superconducting magnets test string, which led to LHC approval that same year." Luigi's focus was cryogenics—that branch of physics and engineering which deals with very low temperatures that do not naturally occur on Earth.

The ITER cryoplant will be the second largest in the world, after the LHC. Luigi explains that while the ITER plant will have less overall capacity, there are several challenges that are unique to the ITER cryo system. "The cooling capacity of the LHC plant, while very large, is shared among eight separate plants distributed over the 27 km circumference of the machine. At ITER, we will have to concentrate a slightly smaller cooling capacity in a common cryoplant and distribute it within a complex system of cryolines in the Tokamak building . In addition, we will have to manage unprecedented load variation due to the ITER pulses. The ITER cryogenic system will be absolutely unique."


And so history is repeating itself for Luigi. Since joining ITER in January, 2008 as Section Leader for the Cryogenic System, he has seen the design through its conceptual phase. The first of four Procurement Arrangements for the system has been signed, and three are to follow this year. "We've accomplished the first step with the cryogenic system," says Luigi "and will move on now to the procurement phase."


As Plant Engineering Division Head with a team of 30 people, he will have the additional responsibility of the Cooling Water, Radwaste, and Hot Cell Sections. "My goal is to see the successful commissioning of the cryo and cooling water systems—both of which must be in place to enable the testing of other components and the cooldown of the magnets before First Plasma," explains Luigi. "The radwaste and hot cell systems will come on line at a later date, but their designs must also be defined far in advance in the context of building construction and the nuclear licensing process."