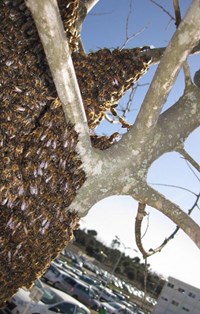 On Tuesday the colony moved out of the lonely oak to a temporary home next to the APAVE office.
That old wrinkled oak standing on the platform edge is no ordinary oak. In Agence Iter France parlance, it is an "ARB", short for "Arbre Réservoir de Biodiversité", a sort of biological reserve for wildlife. As such, it was preserved and protected when the platform was cleared and levelled.


For more than three years, the lonesome ARB was home to a large colony of bees. Some 15,000 of them lived and worked there, patiently building honeycombs to store their larvae, honey and pollen.


A large colony of bees sitting next to a busy worksite can be perceived as a safety issue. There was talk of removing the colony, but technical—and ethical—considerations prevented further action. "We had the choice between either cutting the tree, or killing the bees," explains Bruno Couturier, an engineer with Agence Iter France and an amateur beekeeper, "and either prospect was very unpleasant." 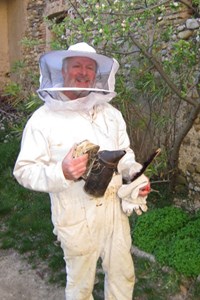 An amateur beekeeper, Bruno Couturier, of AIF, transferred the swarm to his place on the lavender-covered plateau of Valensole.
The bees must have sensed the moral dilemma Bruno and the safety people were facing. They came up with their own solution: on Tuesday, the colony moved out of the lonely oak and gathered on a smaller, younger tree close to the APAVE office in the contractors' area.

When a colony of bees move out of its nest, whether because of lack of space, overpopulation or bad feelings between two rival queens, the colony usually stops at a temporary resting place and sends out scouts to find a more hospitable place to settle. This is when the swarm—that is, the colony on the move—is easiest to catch.

"People had heard about my beekeeping activities," explains Bruno. "I got a phone call from a colleague at APAVE suggesting that I come and pick up the swarm. There's a very simple technique: put a cardboard box under the swarm, shake the tree lightly and as long as the queen falls in the box, the whole swarm will follow."


And so it happened that the ITER bees were transported in a sealed cardboard box all the way to Bruno's place on the lavender-covered plateau of Valensole—the ultimate bee paradise.