Spring is blooming, construction is booming 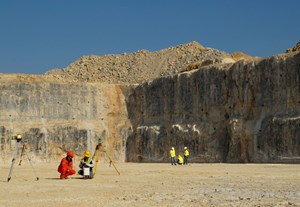 In a scene reminiscent of an Apollo Moon mission, geologists take measurements in the Tokamak excavation pit.
It is springtime on the ITER site. Green is sprouting along the embankments, and construction, in Tim Watson's own words, "is progressing reasonably well" both on the platform and just below, on the Headquarters Building worksite.


"Everything is going pretty much as planned," says the Head of the Buildings & Site Infrastructure (BSI) Directorate. Concrete structures in the basement level of the future ITER Headquarters are now nearing completion and work on the ground floor, where the social amenities such as a restaurant and bank counter will be located, is now well underway.


A "model office" should be set up in September 2011 to test the layout of furniture and office equipment. The ITER Headquarters will accommodate some 500 ITER staff in a set-up designed as "a good balance between very large open-plan offices and small single occupancy offices." Agence Iter France and the European Domestic Agency F4E are expected to hand the building over to the ITER Organization during the summer of 2012. 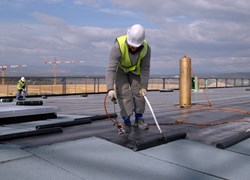 A ''fairly conventional construction, but a very big one,'' the Poloidal Field Coil Assembly Building has entered ''roof and cladding'' operations.
On top of the ITER platform, Tokamak excavation works (literally) reached rock bottom last month. By way of radar mapping and the boring of more than 500 holes, geological surveys provided a detailed map of the substratum. Some voids were detected, the largest being a few cubic meters in volume; these voids will now be filled with concrete.


The Tokamak excavation area is now being readied for the pouring of a thin layer of 'blinding concrete' that will create the clean and flat work surface upon which the 1.5-metre-thick "lower basemat" will be created. Concrete operations should begin a few weeks from now and last until the end of the year. Some 82,000 tonnes of concrete will go into the lower basemat alone.


A "fairly conventional construction, but a very big one," the Poloidal Field Coil Assembly Building has entered "roof and cladding" operations. Five out of the six poloidal field coils of the ITER Tokamak will be assembled here; operations could begin as early as 2012 and last until 2017.


What will happen to this 11,000 square metre building once coil winding operations are complete? "Everybody wants to use it," says Tim. "Nothing has been decided yet, but people always use a space if it's there... There are indeed lots of things you can do in a large open space with two cranes."


What has been accomplished since last August is impressive. It was only nine months ago, after all, that bulldozers, scrapers and power shovels returned to the ITER platform.