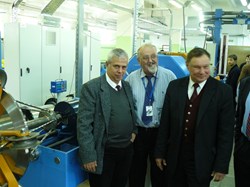 The first unit length of superconducting cable for ITER's poloidal field coil #6 will be manufactured by JSC VNIIKP and shipped to the jacketing supplier in Europe in July. From left to right: Eugen Bratu, EU-DA; Vitaly Vysotsky, Director of the VNIIKP Podolsk Office; and Sergey Lelekhov, DA Technical Responsible Officer.
There's been a change at the Russian Domestic Agency. Following a governmental decree, the Russian Domestic Agency for ITER (RF-DA) is no longer under the umbrella of the Kurchatov Institute. A new "Project Center ITER" was created within the state nuclear energy corporation Rosatom. For the moment, we are still physically located on the premises of the Kurchatov Institute.


So much for the administrative news. As for manufacturing progress, last week we had the first test run for ITER's toroidal field conductor produced by the Russian Scientific Research and Development Cable Institute JSC VNIIKP. A 350-metre-long trial length of copper pre-dummy conductor was subjected to a global leak test, a hydrostatic pressure test and pressure drop measurements in accordance with stipulated procedures. Both the trial length and the testing facility successfully passed all tests.


Also, JSC VNIIKP manufactured 160 metres of niobium-titanium (NbTi) process qualification cable in the presence of representatives from the European and Russian Domestic Agencies. The last stage of cabling was completed successfully and the RF-DA is now in the process of reviewing all quality documents and associated records so as to clear the corresponding Authorization-To-Proceed-Point (ATPP). The next stage for JSC VNIIKP will be to start the manufacturing of the first unit length of cable for poloidal field coil 6 (PF6). 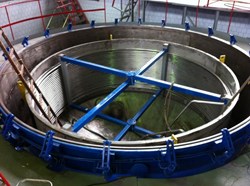 A 350-metre-long trial length of copper pre-dummy conductor was subjected to a first test run comprising a global leak test, a hydrostatic pressure test and pressure drop measurements at the Russian Scientific Research and Development Cable Institute JSC VNIIKP.
The qualification of the jacketing line for toroidal field conductor manufacturing—the next big milestone—should be finished by late May 2011. We expect JSC VNIIKP to finish the manufacturing of 760 metres of copper dummy cable and 100 metres of superconducting unit lengths in June 2011. These unit lengths will be shipped to the toroidal field coil manufacturer later this summer.


Four copper dummies (lengths 408, 508, 2 x 728 m) and one NbTi dummy (160 m) of cable will be shipped to Europe in June. These dummies are intended for developing the technological processes of jacketing and winding for ITER's poloidal field coils number 1 and 6. The first unit length of superconducting cable (734 m) for PF6 will be manufactured by JSC VNIIKP and shipped to the jacketing supplier in Europe in July. The RF-DA and the European Domestic Agency (EU-DA) have agreed to share the work on PF1 and PF6 conductor production, with RF-DA taking the responsibility for strand production and cabling and EU-DA taking responsibility for jacketing.


To conclude, I would like to express my deepest sympathy for the people of Japan. Although the tragedy has not altered the general attitude towards nuclear energy and fusion in our country, it has triggered the necessity to double check all safety systems and monitor their condition throughout the lifetime of nuclear power plants.