Shooting spree in the ITER plasma 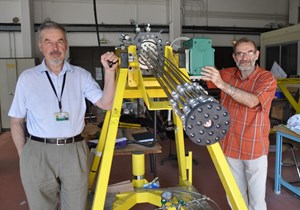 Sergei Putvinski (left) and fusion physicist François Saint-Laurent (IRFM) are not manning a Gatling machine gun. They stand next to the prototype DMS gun cartridge that will run its first tests at the end of the month.
A new technique is on the table for the suppression of runaway electrons—those particles that are accelerated nearly to the speed of light during a plasma disruption and that can cause significant damage to the interior surfaces of the tokamak if left unchecked.
Presented to the ITER Council Science and Technology Advisory Committee this week by Sergei Putvinski, Senior Scientific Officer for Energetic Particle Physics, the new technique proposes to shoot very sharp and dense gas jets into the centre of the plasma to shake out runaway electrons before they build up.
"Runaway electrons build up exponentially during current quench over 20-50 milliseconds (ms)," explains Sergei. "We need a mitigation technique that intervenes in less than 5 ms to prevent this 'avalanche' effect. We need to draw quickly, and shoot continuously," he says with a smile. "Basically, the new technique is like shooting blanks into the ITER plasma."

A DMS gun for ''shooting blanks'' into the current quench.
Called a DMS gun (for disruption mitigation system), the proposed fast-gas injector consists of small gas tanks that would deliver high-pressure gas jets repetitively into the ITER plasma. Positioned in ports around the ITER torus, these injectors would aim to trigger secondary perturbations in nascent runaway electron currents in order to disperse them before the avalanche multiplies relativistic electrons. This concept for runaway electron suppression was developed collaboratively over the last year between the ITER Organization and scientists at the Princeton Plasma Physics Laboratory.


R&D is in progress to test the scheme in Tore Supra, ASDEX Upgrade and the T-10 Tokamak and results are expected in 2011. If these experiments are successful, then ITER will need fast gas delivery systems: either ultra fast gas valves capable of opening in 1-2 ms, or small, pre-loaded gas cartridges that release gas through a rupture disk. "The ultra-fast valve capable of withstanding the harsh ITER environment is something that does not yet exist, but I am confident that it can be developed," says Sergei.


The new fast-gas technique appears to offer significant advantages over another proposed mitigation strategy for runaway electrons that consists of injecting massive amounts of gas to collide with the runaway electrons and slow them down. "This collisional technique appears to require too much gas," explains Sergei. "Too much for our pumping systems, that's for sure. Such massive amounts of gas would also increase the electromagnetic loads on conducting structures." The new technique, in contrast, could potentially decrease the amount of required gas by a factor of 10, according to calculations and mathematical modelling.


Late May, experiments will begin at Tore Supra with a prototype DMS gun cartridge system that was built to test the rapidity of the release system. Termed the FIRE Experiment, Tore Supra engineers built an assembly of 18 cartridges based on the ITER design. "As a device, we know it works," says Sergei. "We now must test whether it works in runaway electron suppression."
The ITER Tokamak has been designed to test a variety of plasma regimes and operational scenarios. Physicists expect that approximately 3 percent of ITER's plasma shots will quench because of plasma disruptions.


The ITER vacuum vessel and in-vessel components have been designed mechanically to withstand about 3,000 disruptions of the course of their lifetime. However, high energy loads during disruption can reduce life time of plasma-facing components such as divertor targets and first wall panels. Effective disruption mitigation strategies for ITER must be developed within the next three years, prior to full-scale operation.