Another use of helium 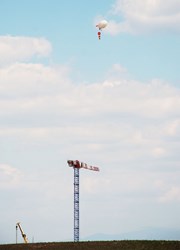 Photographs taken from the balloon hovering at 70 to 100 metres above ground give the public a unique perception of the size and spread of the ITER Project.
Some fifteen years from now, when ITER begins burning the actual fusion fuels, helium will play a crucial role: it is helium atoms resulting from the collision of deuterium and tritium nuclei that will keep the fire burning—what scientists call "alpha heating."
For the moment, as ITER buildings are being constructed, the role played by helium is more modest but valuable nonetheless: helium fills the suspended balloon used in the aerial photo surveys of the platform works ...
Aerial surveys began in 2003 when CEA-Cadarache was drafting an early bid to host ITER, and have been conducted systematically on the ITER site since 2007.


Surveys provide photographic material for both technical and communication purposes: "We need these views to follow the evolution of the work site," says Bruno Couturier from Agence Iter France, who supervised most of the campaigns.
Photographs taken from the balloon hovering at 70 to 100 metres above ground have great communication value: they give the public a unique perception of the size and spread of the ITER Project.
As much as they owe to state-of-the art photo equipment, none of the thousands of high-resolution images that were taken since 2007 could have been produced without a bit—and sometimes a lot—of resourcefulness and ingenuity.
The challenge, even with a theoretically stable tethered balloon, is "to keep the horizon level in the camera's viewfinder," says Cyril Becquart, both the founder of Altivue, the Marseille-based company that Agence Iter France contracted three years ago, and the operator of the balloon.
In order to achieve camera stability and motion, Becquart devised a system of servo-motors, tiny belts and cogwheels that control the camera's support cradle and can adjust both the shooting angle and the zoom's focal length.


A light webcam, attached to the still-camera's viewfinder and connected to the operator's control screen by wireless, provides a clear view of what the camera will be shooting. Becquart radio-controls and operates his camera from the ground as he would a model aircraft.
In three years, Agence Iter France has commissioned some fifteen aerial photography surveys of the platform. Last month, Spie-Batignolles, the company heading the consortium that is constructing the Poloidal Field Coils Building, began its own campaigns through Altivue.
The new harvest of aerial photographs will add to the old one and form what Bruno Couturier calls "the visual memory of the project," both for the construction professionals and for the general public.