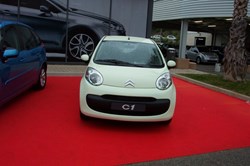 In 2009 French automaker Citroën created a light greenish beige colour for its C1 model which it named ''tritium yellow.''
The element tritium can be put to many uses. Combined with deuterium, it makes an excellent fusion fuel. In association with phosphorous material, it can provide a glow-in-the-dark function to wristwatches, key chains, exit signs or weapon sights.


As for the word "tritium," it seems to have acquired a strong marketing value over the past recent years. In 2009, for instance, French automaker Citroën created a light greenish beige colour for its C1 model which it named "jaune tritium" (tritium yellow).


"We were looking for both a colour and a name that would convey an impression of brightness and lightness," explains Marc Chatrieux, of Citroën's design team. "One of our colourists was using glow-in-the-dark tape in her daughter's room—she came up with the word "tritium" and it sounded nice enough, especially since the colours we are using on our C1 model are obtained with a three-layer paint."


The fact that the element tritium is slightly radioactive did not bother Citroën's design team. "Radioactivity," says Chatrieux, "is an integral part of life..." Nor did it trouble Paolo Bisol, a naval architect in Cannes on the French Riviera who designed the Tritium 720, a "fast, exciting trimaran, able to satisfy the multihull speed freaks but also suitable for family outings and coastal cruising." 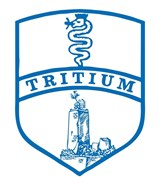 Tritium was only identified in 1934 but in Roman times, a city bearing this name already existed: it is now Trezzo sull'Adda, in the Province of Milan.
Tritium is also the name chosen by a real-estate developer for an office building in one of Aix-en-Provence's business parks. Le Tritium is home to the regional headquarters of a major international bank, a large recruitment agency and several professionals.


Another instance of the use of tritium outside the field of fusion can be found in Trezzo, near Milan, Italy, where La Tritium Calcio, a soccer team established in 1908, was promoted this year to the Professional League's First Division.


The explanation, here, is historical—in Roman times, the city of Trezzo was named ... Tritium.