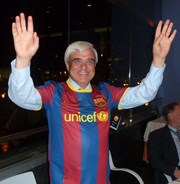 
Frank Briscoe thanked all chairs for carefully steering the European Domestic Agency (F4E) through a very challenging period during which a new ITER schedule was agreed upon, overall cost was re-estimated and management changes were made. Farewell messages for Carlos Varandas were received from Osama Motojima, ITER Director-General, who praised Carlos for his enthusiasm, knowledge and contribution to the ITER project. 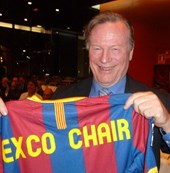 Karl Tichmann, Chair of ExCo
Octavi Quintana-Trias, former director for fusion at the European Commission, summarized Carlos' style as "a combination of consensus and great respect for others." Didier Gambier, former F4E director, thanked him for his vision and command during the tough start-up phase of F4E and concluded by wishing him "bon vent."


Carlos Varandas replied by acknowledging that F4E had come a long way since the first meeting of the Governing Board, saying that he was proud "to see it grow to a full-fledged organization underpinned by hard work and commitment to deliver ITER." He then paid tribute to the work of Karl Tichmann for his crucial role in the approval of large contracts and grants to be placed by F4E. 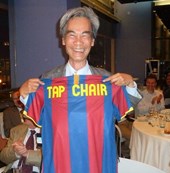 Quang Tran, Chair of TAP
The important contributions of Quang Tran were also recognized by Carlos Varandas and Frank Briscoe, particularly the assessments conducted for the ITER-related technical decisions.


In recognition of their contribution to F4E as "the winning team at the European level," Frank Briscoe offered a toast and presented each of the three outgoing chairs with individualized Barça t-shirts in view of the football club's success at the European level. The three players have rightfully claimed their place at the F4E pantheon.