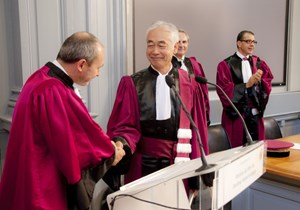 Director-General Motojima had donned the purple toga of professors, to which university Vice-President Denis Bertin attached the traditional ''ermine sash''. Professors André Thévand and Sadruddin Benkadda are in the background.
The title of Docteur Honoris Causa is one of the most prestigious French academic distinctions.


It is awarded to foreign personalities whose contribution to science or the arts is recognized as particularly significant.


Last Tuesday, in the historic amphitheatre of the Université de Provence in Marseille, this honour was bestowed upon ITER Director-General Osamu Motojima, who, in the words of university Vice-President Denis Bertin, "has taken up a challenge on which our future depends."


In accordance with tradition, Director-General Motojima had donned the purple toga of university professors, to which the "ermine sash" was attached when he officially received his diploma.


The recipient's career was retraced by Sadruddin Benkadda, the scientific director of the Marseille-based International Institute of Fusion Science (IIFS). "Director-General Motojima," he stressed, "has always remained close to the academic world [...] He played a key role in establishing a cooperation between Université de Provence and the Japanese National Institute of Fusion Science (NIFS) and also in the creation of the IIFS, which is opened to collaborations with all the universities in the world." 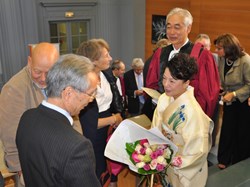 ''I cannot let this moment pass,'' said Director-General Motojima, ''without thanking my dear wife Kaoru who has been always at my side with constant support and encouragement.'' Mrs Motojima, in traditional kimono, is seen here in conversation with Japanese Consul General Danai Tsukhara.
In his acceptance speech, Director-General Motojima recalled his early calling to science and how, by embracing research, he had "hoped to contribute to the human society directly with practical scientific output."


He also explained to the audience (which included several young fusion students of Université de Provence) some of the fundamentals of fusion, the essence of his action at the head of the ITER Organization and, quoting ancient Greek historian Herodotus and French philosopher Descartes, his own approach to science.


"ITER," he said, "will be the stepping stone into a new era, in which a safe and inexhaustible source of energy becomes available for mankind." ITER's doors, he pledged, "will be open to the young people who will take on the future responsibility to complete the research of fusion energy."