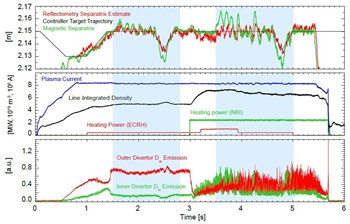 
However for the very long discharges of future ITER-class devices, problems such as drifting integrators or radiation-induced voltages could lead to a failure of the magnetic equilibrium reconstruction and hence to a loss of position control. Also, touching the wall in an uncontrolled way may lead to damage or premature discharge termination. An alternative method is needed—at least as a backup.


One such control scheme has been demonstrated successfully for the first time by the Euratom Portuguese Fusion Associate IST on the ASDEX Upgrade tokamak operated by the Max-Planck-Institut für Plasmaphysik (IPP) in Garching, Germany. IST and IPP have enjoyed a fruitful collaboration in the area of microwave reflectometry diagnostics for many years. Reflecting microwaves off a plasma is usually applied as diagnostic for determining the radial distribution of the plasma density. By scanning the microwave frequency the distance to the antenna of different plasma density layers can be obtained via an Abel inversion procedure, and then converted to a density profile.


In the new approach, the IST experts tracked the position of the plasma boundary in real time using dedicated algorithms and the a priori knowledge about typical edge density profile shapes. The estimation of the boundary density was obtained from a combination of local and line integrated density measurement (the latter coming from interferometry as well as O-mode reflectometry) which does not require any information on the magnetic equilibrium.


While feasibility studies on this method had previously been conducted at ASDEX Upgrade by IST, this time the IST experts assembled a diagnostic system that could produce the desired input—namely the position of the separatrix of the plasma—in real time at a rate of 1 ms and with an accuracy of better than 1 cm.


The hardware for this task (reflectometry system, as well as real time data-acquisition and data-processing systems) was designed and assembled at IST. In a collaborative effort with IPP, the diagnostic system was then linked in real time to the ASDEX Upgrade discharge control system and the loop was closed for position control.


In the figure on the right, radial position control was switched in two time intervals (shaded) from magnetics-based to reflectometer-based measurements. In the top box, the outer plasma radius (red from reflectometer, green from magnetics) followed the prescribed, black-line value within the required accuracy of 1 cm in two different plasma regimes, namely in L-mode (first shaded area) and ELMy H-mode (second shaded area). It can also be seen that some oscillations around the desired value occur, indicating that the scheme can even be improved by fine tuning the controller.


Further collaborative work between IST and IPP will aim to optimize the algorithm. Potential upgrades include not only the controller algorithm settings but also the use of a second microwave reflectometer located opposite to the present one in order to simultaneously control the inner and outer plasma radius.


These experiments represent an important step towards establishing a position control that is not based on magnetic measurements for ITER, and, in the longer run, for future fusion power plants that will have to operate with a very limited set of diagnostics.


The initiative was funded by EFDA as one of the high priority projects highlighted by the EFDA Diagnostics Topical Group.