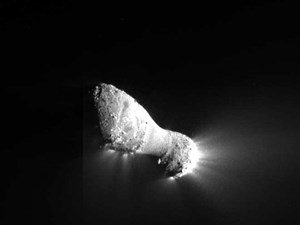 This image of Comet Hartley 2 was captured by NASA's EPOXI mission between 3 and 4 November, 2010, during the spacecraft's flyby of this 2.25-kilometre-long, 300-million-tonne, peanut-shaped chunk of ice. The deuterium fingerprint in the comet's ice perfectly matches that of terrestrial waters.
The water molecule, as every primary school student learns, is made of one atom of oxygen and two atoms of hydrogen. But water as we know it, whether in a glass, in a lake or in the ocean, is not exclusively composed of H2O molecules. It also includes a tiny fraction of D2O, a molecule in which hydrogen is replaced by its heavy isotope, deuterium—the very deuterium that will be used as a fusion fuel in ITER.


The D2O fraction in water is invariable. It is the same in the Durance River as in the Amazon, in the Indian Ocean or in the Mediterranean.


Comets, often dubbed "dirty snowballs," are a mixture of ice and dust. They are the lonely wanderers of our solar system whose orbits sometimes cause collisions with larger bodies. Such a spectacular event occurred in July 1994 when Comet Shoemaker—Levy 9 collided with Jupiter.


Billions of years ago, such cosmic crashes were much more frequent. It has long been an accepted theory that comets, whacking into the infant Earth, played a significant role in creating our planet's oceans.


However, because of the difference in the deuterium ratio of comets' ice and oceans' water, comets alone could not be credited with delivering the total amount of water that presently covers 70 percent of the Earth's surface. Hence, current theories considered that less than 10 percent of Earth's water originated from comet—the remaining 90 percent still somewhat of a mystery.


That is, until the European Space Agency's (ESA) infrared space telescope Herschel focused on Comet Hartley 2, a 2.25-kilometre-long, 300-million-tonne peanut-shaped chunk of ice.


"Comet Hartley's deuterium-to-hydrogen ratio is almost exactly the same as the water in Earth's oceans," says Paul Hartogh, of the Max-Planck-Institut für Sonnensystemforschung in Katlenburg-Lindau, Germany, who led the international team of astronomers in this work.


Hartley's deuterium fingerprint perfectly matches that of terrestrial waters. If the comet has siblings, then, one of the most discussed issues in Earth's early history could be close to being solved.