Conductors on the Silk Road 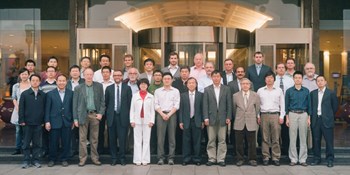 The participants in the Conductor Working Group.
"Thank you very much for coming all the way to China"! With these words, Luo Delong, the head of the Chinese Domestic Agency, opened the meeting of the Conductor Working Group held in Xi'an on 10-12 October. For the first time, this semiannual meeting was organized outside Cadarache. Over 30 representatives and experts from the ITER Organization, the seven ITER Domestic Agencies, and industry came together in the cultural and commercial hub of ancient Chinese civilization, home to more than 3,100 years of history and once the eastern terminus of the fabled Silk Road.


"The conductors are a key component within the ITER Tokamak," Luo stressed in his opening speech. "Manufacturing these conductors with uniform quality is perhaps one of the biggest challenges of this project, as they will be produced in six out of the seven ITER Member states. But looking back, we have made substantial progress both in the manufacturing and the quality assurance of the conductors due to the joint efforts of all participants."


According to the agreement on ITER procurement sharing, China will produce 7.51 percent of the conductors for the toroidal field coils; approximately 65 percent of the poloidal field conductors; and all of the conductors for the correction coils and feeders. "When I first came here in 2003 to visit Western Superconductor Technology, the Chinese supplier of superconducting strands, all I saw were green fields," recalled Neil Mitchell, Head of ITER's Magnet Division. "Today, full-scale industrial production is on the roll for both niobium-tin (Nb3Sn) and niobium-titanium (NbTi) strands."


The meeting of the working group also served to benchmark the conductor manufacturing progress: As of today, nearly 250 tonnes of Nb3Sn strands for the toroidal field coils have been produced, representing more than half of what is needed for ITER; five out of six Domestic Agencies have completed cabling qualification; and three of them—Japan, Russia and China—are producing conductors. One of the topics discussed was thus the delivery and handover conditions of the conductors from the conductor-producing Domestic Agencies to the toroidal field coil-manufacturing Domestic Agencies, to pave the way for the first delivery of ITER components from one to the other.


"The meeting further enabled experience-sharing among the Domestic Agencies who openly discussed their problems ... it was a good example of the synergetic approach that is required to build ITER," says Arnaud Devred, leader of the Superconductor Systems & Auxiliaries Section.  "It also demonstrated the strong commitment of the Chinese Domestic Agency to have a proactive role in ITER conductor production."


We thank Liu Sheng, Lili Liu, Neil Mitchell and Arnaud Devred for their contributions to this article.