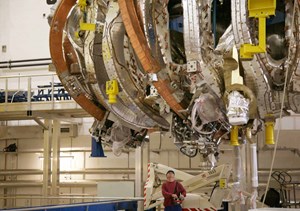 W 7-X aims at producing 30 minute pulses, a duration that is limited only by the cooling power of the installation. © Anja Richter-Ullmann
Stellarators are like a bright kid who never got a first chance. The device that astrophysicist Lyman Spitzer invented in 1952 is at the origin of magnetic fusion research. It reigned supreme among fusion devices for two decades until it fell victim to the spectacular success of the tokamak.


One concept had won over the other; stellarators were abandoned or transformed into tokamaks—the latter becoming more promising as they grew bigger and more powerful.


A half century later, six of the most powerful nations in the world plus Europe are building the giant ITER, while in the remote region of Mecklenburg-Vorpommern, Germany—with a little help from Europe—is assembling Wendelstein 7-X (W 7-X), a stellarator the size of pre-JET fusion devices.


What happened to the early promise of stellarators? "Stellarator plasmas are driven by very complex mathematics," explains Thomas Klinger, the Scientific Director of W 7-X. "Back in the late 1960s, when tokamaks began to take over, there were no supercomputers to help physicists do the math. That partly explains the poor performance of stellarators at the time." And probably explains, also, why tokamaks, simpler in their conception (at least originally!) were able to impose themselves throughout fusion labs.

Fusion projects have a thing for  mountain names. "Project Matterhorn" was the code name for the controlled thermonuclear research effort started by Princeton University in 1951 under the leadership of Lyman Spitzer. Thirty years later, when the Max-Planck-Institut für Plasmaphysik had to decide on a name for its stellarator, it chose that of 1,838-metre high mountain in the Bavarian Alps, "Wendelstein".
A first Wendelstein (7-AS) operated between 1988 and 2002; a second one (7-X), is being assembled in Greifswald, in the German Land of Mecklenburg.

Thomas Klinger was the guest speaker at the Inside ITER presentation last Thursday. His talk and subsequent interview provided some fascinating insights into the W 7-X project and, more generally, on the future of the stellarator—the bright kid who is now getting a second chance.


Asked how stellarators are different from tokamaks, Klinger uses this image: "In a stellarator, confining the plasma is like holding a broomstick firmly in your fist; in a tokamak, it's like trying to balance the same broomstick on your finger."


Stellarators produce intrinsically stable plasmas with no or only modest electrical currents flowing through them; tokamaks, with very strong plasma currents, must devise complex ways of maintaining their equilibrium. "Both are terrible beasts," smiles the Scientific Director of W 7-X. "Ours is a beast to build; yours is a beast to operate."


One doesn't obtain stable plasmas, however, without some engineering effort: W 7-X is a baroque arrangement of twisted coils (20 of them "planar", 50 "non planar"), each uniquely twisted and contorted as if crumpled by an angry giant's fist. The outer vessel has so many openings and "domes" (500!) that Thomas Klinger likes to call it "a big hole with some steel around it..." 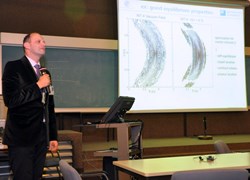 ''In a stellarator,'' says Wendelstein Scientific Director Thomas Klinger, ''confining the plasma is like holding a broomstick firmly in your fist; in a tokamak, it's like trying to balance the same broomstick on your finger.''
A first-of-its-kind development, the W 7-X project went through its share of hardships and trials since it was launched in 1996. As a consequence, its schedule slipped eight full years, from 2006 to 2014, and its cost doubled from an original EUR 500 million to more than EUR 1 billion (30 percent of which is paid by Europe, 5 percent by the Land of Mecklenburg and the rest by the German federal government).


Be it budget, staff or schedule, "estimations in large projects are typically short by a factor two," says Klinger. As a courtesy, he provided his audience with a long list of the do's and don'ts of building a fusion machine.


"Be prepared for many surprises, most of them unpleasant," he advised. "Test everything—anything you don't test will go wrong!" "Be realistic in staff planning: when people are overloaded, they make wrong decisions." "Guarantee that quick decisions are made daily."


And, last but not least: "Keep going at full force—especially in times of crisis!".


A pdf version of Thomas Klinger's presentation can be downloaded here .