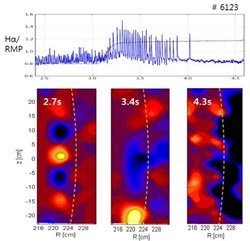 The upper graph illustrates the D-alpha signal and coil current with ELM control by non-axisymmetric field perturbation; the experiments were supported by advanced diagnostics such as electron cyclotron emission imaging (ECEI) (shown in lower images).
There is further promising news with regard to ELM control in ITER: on 3 November, the Korean National Fusion Research Institute (NFRI) announced that the Korean tokamak KSTAR has achieved full ELM suppression by applying non-axisymmetric magnetic perturbations. With this announcement, KSTAR joins the selective club of tokamaks which have achieved elimination of the large impulsive loads on in-vessel components created by Type I ELMs. These ELM-related power fluxes could potentially cause excessive erosion of the plasma-facing components and increase the maintenance requirements for such components, reducing the availability of ITER.


The ELM-suppression technique demonstrated in KSTAR was originally developed at DIII-D (General Atomics, USA) and later demonstrated at ASDEX-Upgrade (IPP-Germany); this research led to the inclusion of a dedicated set of in-vessel coils for ELM control in the ITER design. For the first time, however, the experiments in KSTAR achieved ELM suppression with a perturbation with the lowest toroidal periodicity (n=1); compared to results in DIII-D (n=2 and n=3) and ASDEX-Upgrade (n=2). The n of the toroidal perturbation describes the type of deformation that the perturbation causes to the plasma along its toroidal length, which is a perfect circle around the central solenoid in its unperturbed condition (seen from above).

While KSTAR's third experimental campaign focused on the achievement of the enhanced confinement plasma regime known as H-mode (which is the ITER reference regime for fusion power production), the fourth campaign performed this year focused on active ELM control by various methods such as non-axisymmetric (NA) magnetic perturbation; injection of short and fast pulses of fuelling gas by supersonic molecular beam injection (SMBI); vertical jogs of the plasma column and edge electron heating by electron cyclotron resonance heating (ECRH).

By applying a n=1 non-axisymmetric field, KSTAR researchers observed different effects on the ELMs—going from an increase of their frequency and decrease of size (ELM control) to full ELM suppression—depending on the details of the perturbation applied. These ELM control experiments were supported by advanced diagnostics such as electron cyclotron emission imaging (ECEI), which can provide measurements of the plasma electron temperature with high spatial and time resolution at the edge, showing significant differences between the various ELM regimes studied (uncontrolled ELMs, controlled ELMs and suppressed ELMs), which are being presently analyzed.


While ELM control with n=1 non-axisymmetric perturbations had been observed previously in other tokamaks (such as JET with external coils), it is the first time that ELM suppression has been achieved with n=1 perturbation. While the implications of this finding for ITER remain to be analyzed in detail, it corroborates the reproducibility of the achievement of ELM suppression in tokamaks by the application of non-axisymmetric perturbations as planned for ITER, and may potentially lead to a simplification of the operation of the ELM control coil system in ITER and of its robustness to individual failure of coils.


Besides this major result on ELM control, KSTAR has also explored other schemes of ELM control which could be potentially applied in ITER (for the burning plasmas or ramp-up/down phases)—including injection of fast-gas pulses with SMBI (mimicking pellet pacing in ITER), edge heating and current drive with ECRH and electron cyclotron current drive (ECCD), and vertical plasma position oscillations—with positive results that need to be evaluated in detail.


We'd also like to thank Alberto Loarte, ITER Senior Scientific Officer, for his contribution to this article.