Of French croissants and the Turkish empire 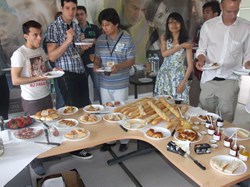 Thursday morning, the lobby of Agence Iter France was filled with the smell of freshly baked baguettes, croissants and pains au chocolat. There were also mimosa, fig, rose and other jams. For those without a sweet tooth, there was saucisson, tapenade and anchoïade. Another occasion for ITER staff to meet informally around an Intercultural Breakfast.


Baguettes, croissants and pains au chocolat are traditional breakfast fare in France. The first production of a croissant dates back to 1683. That year, Austria was under attack by the Turkish Empire. Outside of besieged Vienna, the Turkish assailant found that time was slipping past and decided to dig an underground tunnel to enter the city. The Vienna bakers, the majority of whom worked underground, heard noises and called in the army. The Turks were discovered and retreated.


The bakers were thanked and honoured, and they decided to make bread in the shape of a crescent moon (the symbol of the Turkish flag). The croissant was born! One hundred years later, Marie Antoinette (Austrian Princess who married Louis XVI), introduced the croissant to the French aristocrats. It was only at the start of this century that the butter-puff croissant was created, and became the French national product in 1920.

As for the pain au chocolat ... its origin remains shrouded in mystery. And what about the baguette? The baguette is a specific shape of bread — the diameter of the baguette can be 5-6 cm, but the length of the bread may be up to a metre in length. Parisian baguettes typically weigh 250 grams. The recipe and baking style (in a steam oven) was imported from Austria in the 19th century, but a French law that dictated that bakers could not begin work before 4 a.m. led to the creation of the distinctly elongated loaf. The longer, thinner loaf allowed bakers to complete their task before breakfast time. Thus the baguette was born.