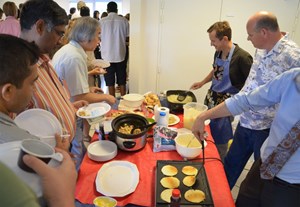 Hot off the griddle: fresh pancakes and hash browns.
Some eighty members of the ITER Organization gathered on Thursday 12 July to share the traditional monthly Intercultural Breakfast, an opportunity for everyone employed at ITER to experience each other's cooking and eating habits. Thanks to the American community (brilliantly organized by Ed Daly) we were able to feast on pancakes straight off the griddle, omelettes, grits, muffins, bagels and cream cheese, banana bread, peanut butter and jelly sandwiches, French toast, cereal, and more in a very friendly and relaxed atmosphere. Colourful tablecloths, flags, big band music and one-hundred-dollar-bill napkins added the perfect touch.

For those of you wondering how someone could have invented the (in)famous peanut butter and jelly sandwich, an American staple, please read on:

1880 - A St. Louis physician, Dr Ambrose W. Straub, crushed peanuts into a paste for his geriatric patients with bad teeth. At the 1893 Chicago World's Fair, also known as the World's Columbian Exposition, his invention gained exposure and popularity. 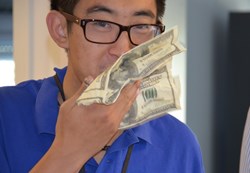 Crisis? What crisis?
1903 - On February 14, 1903, Straub received Patent No. 721,651 for "a mill for grinding peanuts for butter." Dr Straub encouraged the owner of a food products company, George A. Bayle Jr., to process and package ground peanut paste as a nutritious protein substitute for people with poor teeth who couldn't chew meat. Bayle Food Products of St. Louis purchased all commercial rights to the physician's peanut spread and went on to become peanut butter's first American vendor.

1904 - Bayle Food Products took its new peanut butter to the 1904 St. Louis World Fair. It was a big success, selling out in three days at a penny-a-sample, earning a profit of USD 705.11. Soon grocers across America were selling bulk peanut butter in large wooden tubs to satisfy their customers' demand.

1920s-1930s - Commercial brands of peanut butter such as Peter Pan and Skippy were introduced. 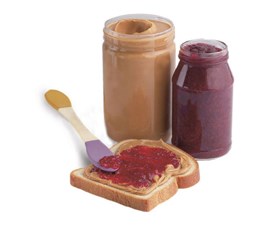 The (in)famous PB & J.
1943 - Nationwide food rationing was instituted in the United States during World War II. Each member of the family was issued ration books, and it was the homemaker's challenge to pool the stamps and plan the family's meals within the set limits. Margarine, butter, sugar, lard, shortening, oils and assorted fresh meats were rationed and expensive. Peanut butter was a good and cheap alternative (peanut butter sold for 24 cents a jar) and a readily available source of protein. Peanut butter was not rationed.

And peanut butter was launched. Today, this quintessential American item can be found in three-quarters of US pantries. More than 50 percent of the annual US peanut crop goes into the production of peanut butter.