How to assemble ITER's backbone 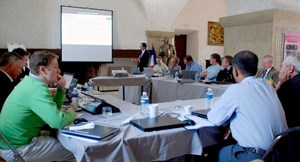 Mike Cole from the US ITER Project Office presents the assembly tooling for the central solenoid.
Although it may appear as a faraway activity, the assembly of the ITER Central Solenoid (the backbone of the machine's magnetic system) and its installation inside the Tokamak were discussed at two Preliminary Design Review meetings held in Cadarache last week.


The US Domestic Agency (US-DA) is responsible for the construction of the six central solenoid modules plus one spare, and for the associated pre-compression structure. Due to its large size, the central solenoid will not be delivered by the US-DA as a single piece and thus needs to be assembled on the ITER site in Saint-Paul-lez-Durance.


The US partner is in charge of the design, procurement and delivery of the special assembly tools that are necessary to assemble the six modules with the pre-compression structure and the current lead extensions. The assembly itself will be carried out by the ITER Organization. Once assembled, the 17-metre-high central solenoid will be lifted and transported to the Tokamak where it will be lowered into its 4.4-metre-diameter pit with a clearance of 42 mm.


Both reviews—assembly tooling and installation—were chaired by Michel Huguet, former director of the ITER Naka site during the Engineering Design Activities (EDA) phase of the project. Most of the presentations were delivered by Mike Cole and Robert Hussung, both staff members of the US-DA, leading the development for special tools. 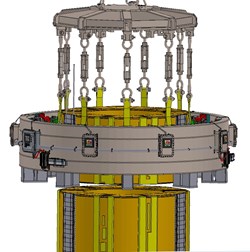 A lifting device will handle the modules and stack them on top of each other with millimeter-accuracy.
The tools include: an assembly platform where the modules will be stacked; a lifting device to handle the modules and stack them on top of one another with millimetre accuracy; a rotating fixture to turn over the three lower modules; a man-lift to allow performance of operations inside the inner bore of the modules; a drill guide fixture to allow drilling holes in the interface between modules in order to insert shear pins preventing relative displacement between modules; a lead extension alignment fixture, and a lead support structure.


Delivery of these tools is planned to start in June 2016, matching the ITER Organizations's needs for the assembly of the machine's central magnet. Manufacturing of the early delivery items, the assembly platform, and the lifting tool is expected to start in early 2015. 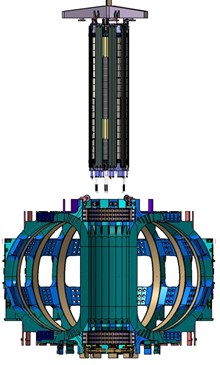 
The review panel was pleased with the quality of the presentations which helped everyone to understand how the tooling is designed and the way it is planned to be used. The reports demonstrated the high involvement of the team and its capacity to address the challenge of accurately positioning heavy loads given the fact that the total weight of the assembled central solenoid is around 1,000 tonnes.


Nevertheless, several chits are in preparation by the review panel and will be communicated through the review report within a few weeks. This will help the design team to focus on the few remaining issues to be tackled before moving into the final design phase.