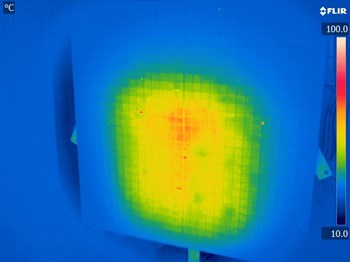 Picture of the ELISE calorimeter recorded by a thermographic camera, which measures the energy content of the particle beams produced. Here, one of the world-record beams displays its glowing signature. © IPP
The ELISE test rig at the Max Planck Institute for Plasma Physics (IPP) in Garching, Germany has now achieved world-record values after two years of research work. In first-time, one-hour operation, a pulsed particle beam of hitherto unattained quality was produced—thick as a tree trunk, homogeneous, stable over time and nine amperes strong.


ELISE (for Extraction from a Large Ion Source Experiment), as the largest test rig of its kind, is developing the heating system that is to bring the plasma of the ITER reactor to a temperature of many million degrees. The core element is a novel high-frequency ion source developed at IPP, which produces the high-energy particle beam.


In order to heat the ITER plasma to many millions of degrees Celsius, two high-energy particle beams with heating powers of 16.5 megawatts each are to be pumped into the 800-cubic-metre plasma volume. The cross-section of these particle beams will be about door size, greatly exceeding the size of the beams used up to now (roughly plate-size cross-sections, with much lower powers).


ITER's neutral beam heating system will take on about half of the overall plasma heating. The size of ITER imposes enhanced requirements: particle beams have to be much thicker, individual particles have to be much faster in order to penetrate the plasma deeply enough, and negative ion source technology must be used (instead of the positive-source technology used up to now). The high-frequency ion source developed at IPP for this purpose was adopted as a prototype in the ITER design. The contract for adapting the source to ITER requirements also went to IPP at the end of 2012. 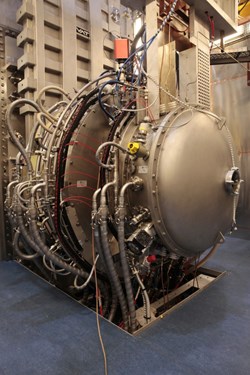 The ELISE test rig at IPP Garching. © IPP, Robert Haas
ELISE permits the investigation of an ion source half the size of the one required for ITER. It produces a particle beam with a cross-sectional area of about one square metre—an increase in size over previous sources that made the revision of technical solutions for heating necessary. ELISE has thus been advancing step by step to new orders of magnitude.


Recently, the ion source achieved operation pulses lasting one hour, during which a stable and homogeneous ion beam of nine amperes lasting 20 seconds could be produced every three minutes. The gas pressure in the source and the quantity of the electrons retained conformed to ITER specifications. In short, a world record.


To enable hydrogen atoms to be accelerated, they have to be made tangible to electric forces as charged particles (positively or negatively charged ions). This is done in the ion source: high-frequency waves injected into hydrogen gas ionize and disintegrate part of the hydrogen molecules. The plasma created—a mixture of neutral particles, negative electrons and largely positively charged ions—flows to a first lattice-shaped electrode.


Through the several hundred apertures of this lattice, an equally large number of individual ion beams are extracted. On being accelerated through another two lattices, the finger-thick individual beams finally merge as a wide single beam, whose cross-section in ELISE is about a square metre. If the surfaces of the ion source are coated with appropriate material, e.g., caesium, the hydrogen atoms there can then take up electrons.


This provides the negatively charged hydrogen ions needed for ITER. To get rid of the unwanted, simultaneously extracted electrons, their flight to the first lattice is obstructed by a transversal magnetic field in the plasma. Small permanent magnets incorporated in the second lattice then guide the electrons out of the beam for good.


The much heavier ions, on the other hand, keep flying almost unhampered. It is not only this magnetic inner life that makes the ELISE lattices technical masterpieces; there is also an elaborate water-cooling system that, despite the high wall load during the heating pulse, keeps every individual aperture in place within hundredths of a millimetre in relation to its partner in the following aperture.


To make all this function properly, there are numerous individual parameters that have to be precisely tuned to one another, for example high-frequency power, caesium concentration, wall temperature, lattice voltages and the magnetic field for deflecting the electrons. Only then does one get the desired result—a stable and homogeneous beam of fast, negatively charged hydrogen atoms.


To enable the fast ions later in ITER to traverse the magnetic field unhampered into the plasma, they first have to be neutralized again. Finally, as fast hydrogen atoms they are injected into the plasma and surrender their energy to the plasma particles.


Once the source has been cleaned, operation will be resumed at full power to attain the full target values. A full-size negative ion source will then be investigated in PRIMA (the ITER neutral beam test facility under construction in Padua, Italy). In preparation, the Italian team will train at IPP for the next two years as development on ELISE is ongoing.
Read the original story on the IPP website.