Partager Tweeter
ITER stars at EXPO-2017 in Astana
After years of design, construction and installation, the futuristic stage was set: a grand glass-walled sphere surrounded by the pavilions of 100 countries, the exhibits of 10 international organizations, and fair grounds designed to host over 2 million people in three months. The doors of the 2017 World's Fair opened in Astana, Kazakhstan on 10 June to the theme of "Future Energy"—a topic that resonates directly with the mission and vision of the ITER Project. 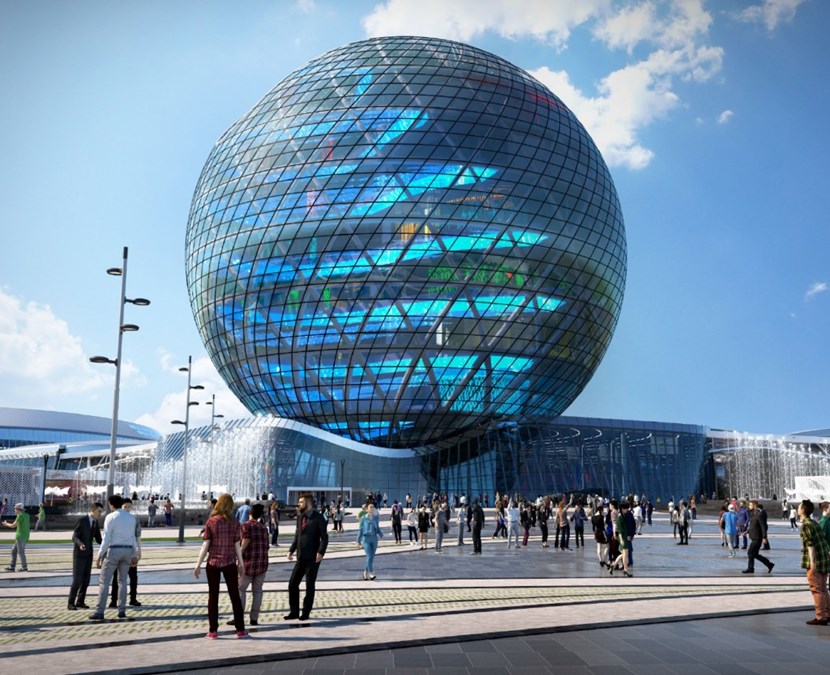 The central ''Sphere'' at EXPO-2017, on a 174-hectare site in Astana where over 2 million visitors are expected in the next three months. The 2017 World's Fair opened in Kazakhstan on 10 June to the theme of ''Future Energy.''
It is only logical, then, that ITER and fusion were well represented at this exceptional technological showcase. "I cannot imagine any science and engineering project with a greater potential impact on the future than harnessing the power of the sun and the stars," ITER Director-General Bernard Bigot said, as he inaugurated the ITER exhibition.


When US architects Adrian Smith and Gordon Gill began to design the EXPO 2017 structures—which, seen from a distance, resemble a spaceport—the landscape was not much more than dry steppe. On 174 hectares they have created a visually remarkable exhibition area consisting of more than 200 buildings and nationally themed pavilions. The centerpiece is an 80-metre-in-diameter sphere showcasing the history and vision of the EXPO host country, Kazakhstan.


A few steps away from this central nucleus, the ITER Organization has designed a 110-square-metre exhibition within the French Pavilion. There, the benefits of fusion as a potential source of safe, clean and virtually unlimited energy—and the ITER Project under construction now, underwritten by 35 nations—are explained through a series of multimedia tools, models, displays and virtual reality. As Host to the project, France had invited ITER to participate in EXPO 2017 alongside technologically innovative companies such as Peugeot, Total and Veolia. 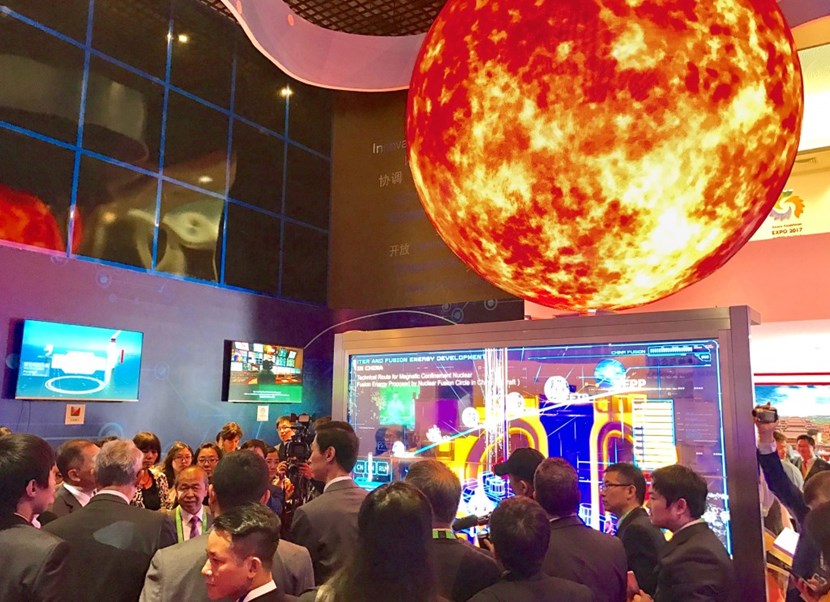 The opening of the Chinese Pavilion drew an enthusiastic crowd eager to learn about fusion. A holographic model of the ITER Tokamak was one of the highlights.
"The future of fusion—like the future of science—is partnership." This conclusion, delivered by Director-General Bigot at the inauguration ceremony, was reinforced both by the exhibit content and the attendance of French Commissioner Pascal Lorot and the heads of the European, Russian, Korean and Chinese Domestic Agencies for ITER.


"Let me assure you that we are grateful to have so many of you as our partners. I offer my thanks to the Government of France, my warmest wishes to our gracious Kazakh hosts for a beautiful and memorable World EXPO-2017, and my most sincere welcome to all of you and your guests at this inauguration of the ITER exhibit."


The ITER exhibit is not the only one featuring fusion energy in Astana. The Chinese Pavilion features a spectacular 4D cinema show and a cutting-edge model of the ITER machine that uses holographic animation. Visitors to the central Sphere are also treated to a model of the KTM tokamak—reduced-size, but large enough to climb into.


Read the full text of the ITER Director-General's speech here.