One year in the life of the ITER construction project

Laurent Schmieder, Project Manager of the division for site, buildings and power supplies at the European Domestic Agency Fusion for Energy (F4E) 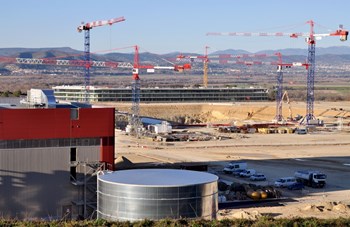 The three projects that transformed the ITER platform in 2011: the Poloidal Field Coils Winding Facility (foreground) which will be ''signed and delivered'' during the first weeks of January; the excavation of the Tokamak Pit and ongoing foundation works; and—in the distance—the ITER Headquarters.
We can all look back on 2011 with a great deal of satisfaction. After a long period of anticipation and the beginning of construction in 2010, the pace of works accelerated during the last twelve months and the ITER landscape has now been completely transfigured.


The civil works, exterior cladding, interior fittings and road works for the Poloidal Field Coils Winding Facility were all completed during the year on time and on budget. This is a positive, encouraging signal to my European Domestic Agency (F4E) colleagues in Barcelona and for the project as a whole. Throughout the 18-month project we enjoyed excellent relations with our contractors, the French consortium Spie Batignolles/Omega Concept/Setec, and works were carried out in good spirit. During the first weeks of January, this facility will be handed over to F4E by the contractors.


Spectacular progress was also made in the Tokamak Pit. It's only the beginning, of course, but the large-scale excavation and foundation works that have occupied hundreds of workers signify the real start of ITER. Works have progressed on schedule, despite some very rainy periods, and I'm very thankful to be able to report that we have had no major incident or accident—quite a good record for such a large and complex construction area.


Safety remains a priority for the entire F4E team. We have taken the time to provide clear guidelines on safety and to make sure that these guidelines were well understood through training. As a nuclear facility, the works in the Tokamak Pit also undergo regular inspection. Both internal audits and those conducted by the French nuclear safety regulators (ASN) have confirmed the good quality of the works. 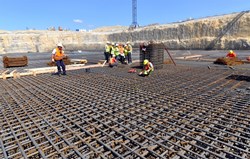 Regular inspections by French nuclear safety regulators (here, in yellow) have confirmed the good quality of the works in the Tokamak Pit.
ITER construction may be the most visible sign of progress in 2011, however I can tell you that work accomplished behind the scenes is no less impressive and large-scale. In the B23 office building where F4E and F4E contractors are housed on the ITER site, 150 designers and engineers are close to finishing the final tender designs for all buildings. We have completed the tender designs for civil works and are now progressing rapidly on services. These designs, once reviewed by F4E and by the ITER Organization, allow us to prepare to launch the next stage: major contract signatures.


What can we expect to see in 2012? F4E will sign the following major contracts for the Tokamak Complex: civil works; services; and the main crane. We will complete the seismic isolation system (plinths and bearings) in the Tokamak Pit and begin to pour concrete for the Tokamak Complex basemat (the "upper" basemat). We will start work on the deep galleries around the Tokamak Pit for major networks. And we will begin the slab work for the Assembly Hall—a building that will be located adjacent to the Tokamak Complex. To prepare for the thousands of workers who will be required on site from 2014 forward, we will realize a contractors area to the west of the platform with offices, locker facilities, canteen, and water and power connections.


As a last word, I'd like to say that I sincerely appreciate the working conditions that F4E enjoys here at ITER. F4E has a relationship of trust with its host, the ITER Organization. Even if at times we may not always share the same point of view, we have the same long-term goal in mind and that is to find the best solution for the ITER Project.