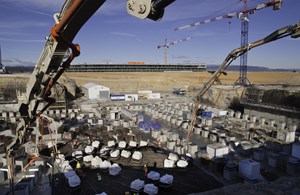 
Work on this 1.5-metre-thick structure began before dawn on a warm August day six months ago. Since then, some 18,000 m³ of concrete have been poured over a dense array of steel rebar and stirrups—some 3,400 tonnes of metal in all.


In order to insure close-to-perfect homogeneity of the basemat, each slab had to be poured in one continuous operation lasting no more than an extended workday. Considering that the pumps could deliver an average of 100 m³ of concrete per hour, the 11,500 m² surface of basemat was broken down into 21 sections, each to be filled successively with 800 m³ of concrete. 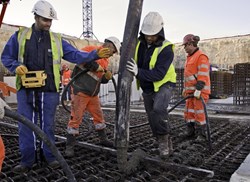 In order to ensure ''close to perfect'' homogeneity, each slab had to be poured in one continuous operation lasting no more than an extended workday.
This slab-by-slab technique also reduced the forces exerted by concrete "shrinkage" on the steel rebar.


A central area of the basemat—approximately 80 m²—was reinforced to bear the weight of the mammoth central column assembly tool that will operate during the machine assembly phase on the Tokamak Complex basemat. This extra strength was achieved through an increased density of stirrups.


Upon the now-finalized basemat, 159 seismic bearings (out of a total of 493) remain to be installed over the next two months. Twenty percent of the retaining walls have been completed and two parallel operations will commence this spring: a much smaller (5,500 m²) and relatively shallow excavation for the Assembly Building basemat and, prior to rebar reinforcement, horizontal wooden formwork and scaffolding for the next basemat that will be poured: the Tokamak Complex basemat.