A Big Machine to talk to 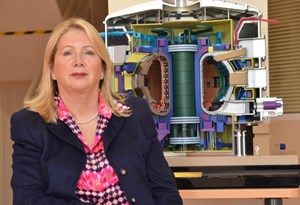 Aires is convinced that ''you can't be just a lawyer, an accountant or an administrator. If you want to do your job properly and enjoy doing it, you need an understanding of the broader picture.''
When she worked as a lawyer in the Financial Division of CERN in the mid-1980s, Aires Soares liked to spend time close to the machine. "It was like having a conversation," she says, "and what I was learning was just fascinating." The Super Proton Synchrotron (SPS) was a relatively small installation compared to the present Large Hadron Collider (LHC). But it was one of the most advanced of the time and chatting with it about its ventures into the realm of subatomic particles must have made for very interesting "conversation" indeed.


Preparing contractual clauses or reporting to CERN's Financial Committee could appear quite far removed from the unveiling of matter's most intimate secrets ... Aires says it was not. "There was a real community feeling at CERN and everyone, physicist or not, was definitely part of it."


For many years, Aires Soares missed the conversations she had with the CERN machine. At ITER, which she joined on 1 November 2011 as head of the Finance and Budget Division, she's confident that the conversions will resume and that the ITER Tokamak, once built and operating, will provide the same opportunities and rewards.


Just as the Large Electron-Positron collider (LEP) was entering operation at CERN in 1989, Aires left for the European Commission's Directorate-General for Research. She headed the Administration and Finances Division for 14 years, before moving on to more policy-oriented positions where she contributed to developing research policy, defining a strategic plan for energy in Europe, and promoting cooperation in energy with countries like Japan, US and China—what she calls "building bridges."


One of the major "bridges" Aires contributed to was the US-EU Energy Council formed in 2009—an institution playing a "vital role [...] in fostering cooperation on energy security, renewables and other clean energy technologies," according to a recent White House statement.


In 2010, after having headed a unit called "Horizontal aspects and coordination in Nuclear Energy," Aires was assigned to the EU delegation in Washington, DC where, as minister-counsellor, she continued to "build bridges"—this time from the other side of the Atlantic.


Whatever jobs she has held over the past twenty-five years since her PhD in law from the University of Montpellier, France, Aires' relationship to science always went far beyond her job's requirements. She is convinced that "you can't be just a lawyer, an accountant or an administrator. If you want to do your job properly and enjoy doing it, you need an understanding of the broader picture."
Aires liked the flexibility and efficiency of the American system and she enjoyed "meeting and working with research policy people from embassies, universities, industry, think tanks, and US administration and congress," ... but still, she longed for a machine to talk to. When she learned that a position had opened at the ITER Organization for a new head of the Finance and Budget Division, she felt she would be on familiar ground in Cadarache.
Compared to CERN, ITER is young. "Its culture," she says, "is still in the making, which makes things even more exciting and challenging." An important aspect of her new job will be to make sure that all are committed to "taking the best care of the ITER budget" and to provide assurance to the ITER Members that their money is "soundly managed and spent efficiently". She's begun by "clarifying the mission of the division."


And soon, she'll have another Big Machine to talk to...