A fire fighter onboard 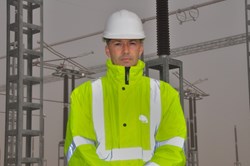 
Christophe joined his native Vinon-sur-Verdon fire brigade in 1988. He didn't have to wait long to receive his "baptism by fire": the summers of 1989 and 1990 in Provence were among the worst in the history of forest fires. The Sainte-Victoire, the "holy mountain" of Aix-en-Provence, was ravaged by flames, as were tens of thousands of hectares throughout the region.


The intense experience of those years confirmed his calling. Not only would Christophe continue to volunteer for the local fire brigade; he would also study to make firefighting his profession.


Firefighting in France is a civilian business, mostly conducted by volunteers (200,000 volunteers out of a total force of 240,000). There are, however, two prestigious exceptions: the Paris Fire Brigade, which is a French Army unit, and Marseille's Marine Fire Battalion (marins pompiers), which is a branch of the French Navy.


After graduating with a degree in health and security and passing the competitive examination to become an officer with honours, Christophe was offered the opportunity to do his French national service requirement in the Marseille Fire Battalion. "I was a 21-year-old junior lieutenant and on some evenings I would be the only officer on call in the whole city..."


The experience was intense and thrilling. Christophe liked the clear-cut workings of the military, the variety of the tasks, and the close-to-the-field nature of every operation. "Dealing with fires makes up only 10 percent of a firefighter's activity. The remaining 90 percent is all about rescuing and assisting people in every imaginable situation."


When his national service had ended, Christophe decided to stay with Marseille's Marine Fire Battalion. His engagement was to last 19 years, during which he rose to the rank of Lieutenant Commander (Capitaine de corvette); acquired an expertise in ship safety and chemical, biological, nuclear and radiological risk (CBNR); conducted several missions abroad as a European assessor; and eventually headed the 700-hundred-student Marine Fire Navy School.


Christophe's job at ITER will be something akin to the one he performed when he formulated the security organization for the French nuclear aircraft carrier Charles-de-Gaulle. As the twin-reactor warship was being constructed he devised the procedures to "protect the ship's personnel as well as the local population whenever the ship would touch port."


Nuclear installations are like high-sea vessels: they form a kind of bubble where specific rules apply and where efficiency depends on the cohesion of a close-knit community. Navy people have always felt at ease in nuclear projects, and Christophe, who arrived at ITER on 3 January, already does. "Working for ITER," he says, "is completely in line with my initial calling ... In two weeks, I have already learned a lot. I had an external vision of the project—now I must acquire its culture and I realize this requires a lot of finesse..."


With a little help from the ITER website, Newsline, and other publications, Lieutenant Commander Ramu is gradually penetrating the "scientific heart" of the project. And the more he advances, the more he finds it fascinating.