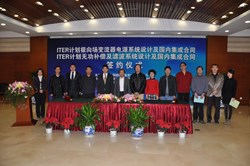 
A tender evaluation meeting for the design and internal integration of RPC & HF was held in Beijing on 8 November 2011 in the presence of a representative of the ITER Organization, Jun Tao, and experts in the field. On the basis of its design solutions, the contract was awarded to the Rongxin Power Electronic Company Limited. During a similar tender evaluation process on 11 December, the Institute of Plasma Physics at the Chinese Academy of Science (ASIPP) was chosen to supply the design and internal integration of ITER's AC/DC converters. The China International Tendering Corporation was authorized by the CN-DA to carry out the tendering process for the two packages.


During the signing ceremony on 21 December, CN-DA Director Luo Delong expressed his appreciation for the quality of the tendering work performed. He also stressed his high expectations for productive cooperation with the two supplying companies.


The Director of ASIPP Li Jian'gang stated that he was pleased that his institute had the confidence of the CN-DA. "I am convinced of the capability and determination of ASIPP in fulfilling the requirements of the contract." The director of the Rongxin Power Electronic Company Limited, Zuo Qiang, stated, "As a major enterprise in the field of power electronics, we appreciate the chance to participate in the ITER Project. We also look forward to cooperating with ASIPP toward achieving a common goal."


The CN-DA will procure the fourteen AC/DC converters that will provide controllable current/voltage to ITER's six poloidal field coils. It will also procure the RPC & HF system rated at 750Mvar to stabilize the power grid and to provide the quality of electrical power necessary for operation.