The A to Z on assembling ITER's largest components 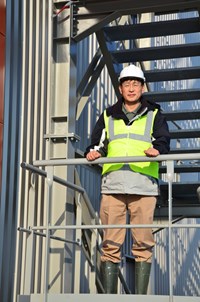 Byung Su Lim, leader of ITER's Poloidal Field Coil Section, posing in front of the completed winding facility.
Over the course of six years, the Poloidal Field Coils Winding Facility will house the successive winding and assembly of ITER's poloidal field coils, the huge, circular coils that will be positioned horizontally around the toroidal field magnet system.


All but one* that is. Of ITER's six poloidal field coils the smallest—the nine-metre PF1—will be procured by Russia and delivered to the ITER site. The five others are too large to be transported in their finished state: with diameters up to 24 metres, PF2, PF3, PF4, PF5, and PF6* will be manufactured under European procurement in the 257-metre-long winding facility.
Manufacture will take place in three sequential phases. From the reception of spools of conductor at the south end of the building to the exit of completed coils from the opposite end, the fabrication of each poloidal field coil will require at least 24 months.

The winding and assembly activities for ITER's largest poloidal field coils will take place in this 257-metre, on-site facility.
Phase One: Winding - The raw material for the poloidal field coils is delivered on 20-ton spools from factories in China, Europe and Russia. Some 1,174 tons of niobium-titanium (NbTi) conductor will arrive at the Poloidal Field Coils Winding Facility in staggered deliveries.
Adjacent to the unloading area a climate-controlled "clean" enclosure is the theatre for winding operations. Lengths of NbTi conductor fed from two spools simultaneously ("two-in-hand" winding) are insulated and wound into a flat, spiralled coil called a double pancake. 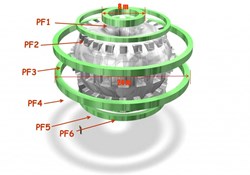 The poloidal field coils completely encircle the ITER vacuum vessel and toroidal field magnet system. These giant components are—for four of them, at least—too large to travel after manufacture.
"Starting from the conductor spools, two-in-hand double pancakes are wound, and insulated with glass-fibre tape", Byung Su Lim, Poloidal Field Coil Section Leader at ITER, explains. "The winding speed must be synchronized with the speed of insulation wrapping and the tension of insulation tape controlled. The shaping of each termination (for connection one to the other) is performed after the completion of winding."
The total conductor lengths required for the winding stage of manufacture varies from 6 km for PF2 to 14 km for PF3. "The size of each double pancake depends on the dimensions of the final coil," stresses Lim. "Depending on the number of turns in each double pancake and the number of pancakes stacked to form the final coil, each poloidal field coil is unique." Thirty-nine double pancakes will leave the winding facility's assembly line over a six-year period.


Phase Two: Impregnation - For the second phase of operations, the double pancake windings are transferred by overhead bridge crane to the impregnation area in the centre of the Winding Facility. "The double pancakes at this stage are still considered 'light components,' weighing a maximum of 37 tonnes," says Lim. The cranes lower the double pancakes into moulds for vacuum pressure impregnation (VPI) with epoxy resin. The resin—acting inside of a sealed mould and under the effect of heat—hardens the glass tape to bond each double pancake into a rigid assembly.


Current passed through the conductor heats the double pancake to approximately 80 degrees Celsius—once hot it is put under vacuum. At the same time, the resin is put under vacuum, degassed, and heated to 80 degrees.
"The challenge during this phase is to distribute the resin in a uniform manner," explains Lim. "Pressure is our main ally: propelled by pressure from the lowest point of the double pancake, the resin reaches all areas before flowing out at the highest point. We'll leave plenty of time for the resin to wet the insulation completely and to avoid creating trapped bubbles in the winding." 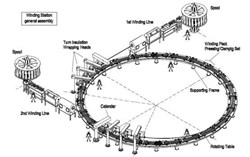 Two conductor spools feed simultaneously into one double pancake winding.
Once impregnated, the double pancake is put first at atmospheric pressure and then at overpressure, and "cured" for more than 24 hours above 100 degrees Celsius.
Phase Three: Assembly: The resulting solid double pancake winding is transferred to the assembly area of the building where it is stacked and joined, a second vacuum impregnation is performed to harden the stacked assembly, and additional components added such as clamps, protection covers, and pipes.
The floor in this area of the winding facility has been reinforced for the exceptional weight of the final assemblies. "Eight double pancakes are stacked to form the winding packs for PF coils 1,3,4 and 5, an respectively six and nine double pancakes for the winding packs of PF 2 and PF6. That puts the completed coils—winding pack plus additional components—at between 200 tonnes and 400 tonnes," says Lim. "These massive components will exit the winding facility on self-propelled transporters."
The size and weight of the poloidal field coils are a particular challenge for manufacturing operations, according to Lim. "Manufacturing tolerance targets have been defined at 3-4 mm—a particularly challenging target for components that measure up to 24 metres in diameter."


Avoiding deformation during handling is also an issue. "At frequent intervals throughout the manufacturing process first the double pancakes and then the coils will have to be lifted and manoeuvred as smoothly and evenly as possible, with a maximum authorized tilt of 10 mm," says Lim. 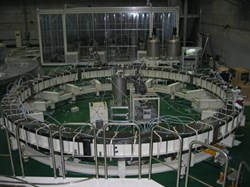 The challenge of the impregnation step is to distribute the epoxy resin uniformly and without the formation of bubbles.
A heavyweight crane located at the far end of the Winding Facility will have the capacity to transport loads of up to 100 tonnes (or 50 tonnes with its circular spreader beam attached). The final assemblies—which will surpass these limits—will be mounted on retractable pneumatic supports.


"At ITER, we are building some of the largest coils in the world," concludes Lim, who joined ITER after ten years at the KSTAR tokamak in Korea where he oversaw the manufacture, assembly, installation and commissioning of the toroidal field coils. "It's especially exciting to be heading into the construction phase of poloidal field coils in earnest. All of our careful planning and teamwork is about to be put to the test. All of us—at ITER and at the Domestic Agencies—are looking forward to getting started."


Click here to watch a video produced by F4E on the poloidal field coil manufacturing.


* Editor's Note: The European Domestic Agency concluded an agreement with China in October 2013 for the fabrication of PF6. As a result, only four poloidal field coils will be produced in the winding facility on the ITER site.