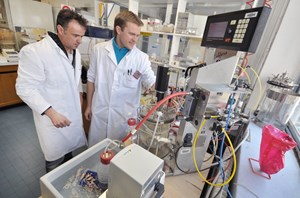 A world's first: Christopher Lefèvre (right) of CEA-Cadarache's Cell Bioenergetics Laboratory headed by David Pignol (left) succeeded in mastering the cultivation process of magnetotactic bacteria (MTB).
On the ITER side of the fence, you'll have the largest and strongest magnets in the world: some 14 metres high; some as heavy as a fully-loaded Boeing 747; some 24 metres in diameter. A stone's throw away, on the CEA-Cadarache side, their microscopic counterpart: no more than 50 nanometres in size (50 billionth of a metre!). Magnets by the hundreds of millions packed into one single drop of water.


The bulkiest among the ITER magnets, much too big to be transported along the specially adapted ITER Itinerary, will be assembled in a 257-metre-long building on site. CEA's nanomagnets are being produced naturally. Bacteria—not industry—are doing the job.


Magnet-producing bacteria are nothing new. Such microorganisms, called magnetotactic organisms, were identified and described some forty years ago. Like migratory birds, magnetotactic bacteria (MTB) biomineralize tiny crystals of magnetite, an iron oxide that acts as a built-in compass.


Birds and bacteria use this inner compass to orient themselves relative to the Earth's magnetic field. It allows birds to find their way to warmer climates and back, and bacteria to swim in one single direction rather than haphazardly, thus conserving energy in their quest for nutriments. 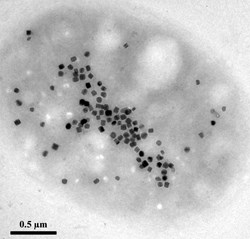 MTB naturally produce tiny magnetic crystals (here in black) and use this inner compass to orient themselves relative to the Earth's magnetic field.
What is new, and what triggered several reports in science magazines throughout the world, is a double breakthrough: first, the identification of a new family of MTB that produces a different—and possibly more promising—type of nanomagnet for biotechnological applications (an iron sulphate named greigite); and second and even more important, the mastering of cultivation that could lead to mass production of MTB.


The excitement was justified. "With MTB, we have an object whose biological activity can be oriented by magnetic fields," explain David Pignol, head of Cadarache's Cell Bioenergetics Laboratory and Christopher Lefèvre, the post-doc researcher who discovered the greigite-producing bacteria and developed the cultivation method.


"We can imagine tweaking their DNA and transferring an extra biological function to their genome, such as the capacity to degrade pesticides or other toxic molecules. Then, we'll have the ability to guide this added biological function with a simple magnet."


The achievement was part of a larger quest that also involved Pr. Dennis Bazylinski at the University of Nevada at Las Vegas; researchers from the French Centre National de la Recherche Scientifique (CNRS); several universities in France, the US, Brazil and Hungary; and a group of scientists from the Ames Laboratory of the US Department of Energy.


Greigite-producing bacteria, which Christopher Lefèvre isolated in the brackish waters of Badwater Basin on the edge of Death Valley National Park (USA), could open the way to a wide field of application.


Genetically-modified MTB could be used for environmental clean-up or as intelligent contrasting agents in medical imaging techniques such as Magnetic Resonance Imaging (MRI): NeuroSpin, a CEA research centre on neuroimaging, has begun exploring this technique on lab rodents and will soon extend it to monkeys. Cancer therapy is another potential application, by way of a technique called hyperthermia in which heated crystals could be directed to burn cancer cells. 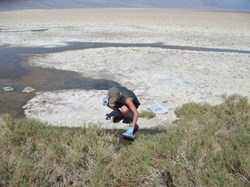 Christopher Lefèvre isolated a highly promising MTB in the brackish waters of Badwater Basin on the edge of Death Valley National Park (USA).
The difficulty, until now, was to cultivate and eventually mass-produce MTB. "Christopher succeeded in mastering the cultivation process," says Pignol with pride. "It's a world's first."


The genome of the most promising of these magnetotactic bacteria has been sequenced and the bioreactors at CEA-Cadarache Institute of Environmental Biology and Biotechnology are now teeming with magnetic bacteria life.


"There is still a lot of work to be done in optimizing the cultivation method," adds Lefèvre. The challenge now is to turn the tame bacteria into mass producers—a difficult task but a highly promising prospect.


More information in The Scientist, ZeitNews and The National Science Foundation web sites.