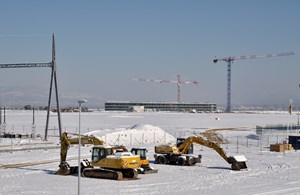 Most of Europe, and quite exceptionnaly balmy Provence (here, the ITER platform on February 1st) were under a severe cold spell last week. The French power grid operator RTE feared a collapse that, fortunately, did not happen.
As bitter cold swept across most of Europe this week, France's electricity demand reached a record high of 101,700 megawatts (MW), equivalent to the total production of approximately 100 nuclear reactors. The previous record dated from 2010, when a peak of 100,500 MW was reached on 15 December.


The French power grid operator Réseau de Transport d'Électricité (RTE) feared a collapse, especially in the "weak" regions of Provence-Alpes-Côte d'Azur (PACA) and Brittany where production barely covers 90 percent of the local demand. The situation in the PACA region was particularly tense as electricity is transported by one single west-east 400 kV power line.


As temperature falls by one degree Celsius, electricity demand in the whole of continental Europe increases by 5,000 MW—the equivalent of the combined consumption of Paris and Lyon.


France, with only 60 million inhabitants out of a population of 350 million continental Europeans, accounts for half of this added consumption. The reason for such "gluttony" is historical: when France decided to "go nuclear" in the late 1970s, authorities strongly promoted electrical heating in order to reduce imports of heating oil.


Now, some 35 years later, nuclear plants account for more than 75 percent of French electricity production; the French kilowatt is among the cheapest in Europe and about a third of French households depends on electrical heating exclusively.


Hence the "fragility" of the country in terms of electricity supply, when temperatures drop as they have since the first days of February.


Thirty-two years ago, on 19 December 1978, the failure of a 400 kV power cable in eastern France caused a general blackout that affected 80 percent of the country. Under the pressure of falling temperatures, demand for electricity had increased to 38,000 MW, caused the collapse of the power cable.


In a little more than three decades, consumption has more than doubled...